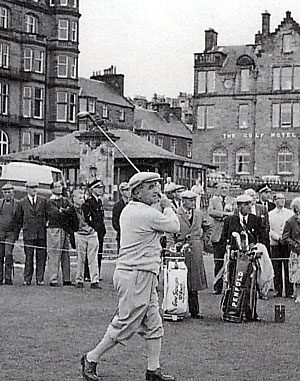 Gene Sarazen tees off in his 1962 match with Henry Cotton on The Old Course.

A Golf Classic (Sarazen vs. Cotton) For Golfers Stuck At Home

We have a new term in the wake of these tough Corona Virus times.

In many parts of the country, people have been ordered to:  “Shelter In Place.”

What it basically means is stay the heck at home,  don’t go anywhere unless you really have to.

As a special service to those golfers who are now “Sheltering In Place,” we have a special treat for you.

How about Gene Sarazen vs. Sir Henry Cotton on the Old Course at St. Andrews?

The year was 1962, the first year Shell’s Wonderful World Of Golf appeared on the American television scene.  Golf among the general public was still in its infancy although a young guy named Arnold Palmer had burst on the landscape by 1958 and America fell head-over-heels in love with the swash-buckling style of the young man from Pennsylvania.

This match is a classic.  It has the ready-to-turn 60 Sarazen matched up with England’s Sir Henry Cotton, winner of the 1934, 1937 and 1948 Open Championships.  Sarazen is one of the men to win all four majors.  He won the PGA in 1922, ’23 and ’33;  The U.S. Open in 1922 and ’32 and is embedded in Masters history with his famous four-wood into the 15th for double-eagle that won him the Green Jacket in 1935.  Gene won the Open Championship in 1932.  He’ll recount before this match how he was looking to make it two straight in 1933 when the Open was played at St. Andrews.  An eight on the 14th hole in the final round cost him the championship.  A seven would have gotten him into the 36-hole playoff.

You wonder if Sarazen’s eight on the 14th back then might have included a stint in the Hell Bunker?

This is a great match to watch because you’ll see some typical Scottish weather.  This one was filmed in the summer but weather can be incredibly unpredictable.  On this day, the temperatures are in the high 30s,  low 40s and the wind is whipping in the 30-mile per hour range.  It’s not that strong early in the match but once they hit the “Loop” holes, the winds get pretty intense.

They didn’t have the clothing technology we have today and both players brought overcoats to wear between shots, you can see the caddies hauling them around.

This match is one we can relate to as there was a lot of struggling going on.  Both players were up in years, Cotton almost 55 and as we previously mentioned, Sarazen turned 60 in 1962.  Sarazen would go on to become the regular host of these matches and is fun to watch and his observations are classic stuff.

The course pretty much looks the same although most of the bunkers are revetted now.  Both of these experienced players managed to avoid the bunkers the entire match, and that is huge at St. Andrews.

The one thing that really jumps out is that there’s no Old Course Hotel on the 17th hole.  It was built in 1968.  In this match, they hit their tee shots over the old “Auchterlonie Sheds” on the famous Road Hole.

You’ll love this one.  No commercials, it is 40-some minutes of pure golf, the way it used to be.

It will take your mind off this virus problem, at least for a while.

CLICK HERE TO WATCH GENE SARAZEN VS. HENRY COTTON AT THE OLD COURSE.