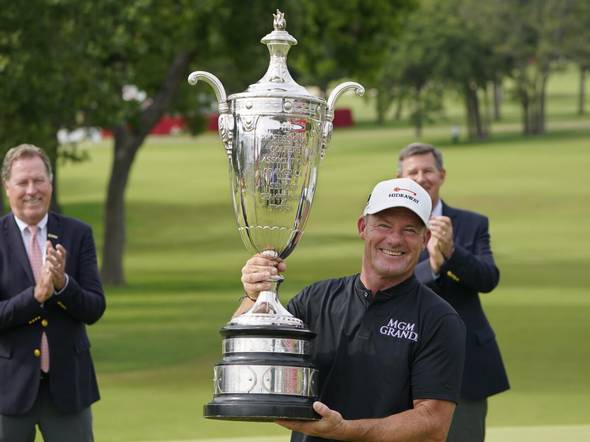 Alex Cejka is now two-for-two in senior majors this season.

Alex Cejka Romps At Senior PGA As Others Collapse

Alex Cejka was an after-thought during his regular PGA Tour career, now he’s a superstar on the senior circuit after nailing down his second straight major Sunday at Southern Hills in Tulsa.

Cejka blew away the field during the final round of the Senior PGA, closing with a three-under par 67 — good for a four-shot victory.

“It’s incredible,” Cejka said after hoisting the huge trophy.  “Seeing and knowing all those names who are up there on the trophy and being on the trophy myself, it’s a dream come true.  Monday when I played for the first time here I walked those fairways and remember seeing this on TV in all those years and I can’t even describe how it feels to be here and touching the trophy. I’m just super blessed. I’m super happy. It’s an incredible feeling right now.”

Cejka started the final round a shot back of two-time senior major champ Steve Stricker, who shot 67 on Saturday and was sitting at six-under through 54-holes.  But Stricker inexplicably fell apart.  The U.S. Ryder Cup captain had eight bogeys and a double on his card, finishing with a head-scratching 77.

“I was actually almost in shock, which threw my game off totally,” Cejka observed.  “I was expecting him to come out and just put so much pressure on, as great a player as he normally is. But it’s golf.”

There would be no run by Mike Weir either.  Weir started Sunday two back of Cejka and three short of Stricker but he closed with 72, opening the door for Tim Petrovic, whose closing 67 earned him the runner-up spot at four-under.  Retief Goosen’s 66 took him to three-under where he tied for third with K.J. Choi.  Choi closed with 68.

Cejka spent most of his career on the regular Tour winning and losing his Tour card until he won the 2015 Puerto Rico Open.

But now he’s been re-born as a senior superstar.

Ewing won the second hole to go 1-up then she took the sixth to go 2-up and never trailed in the match.  Both players looked weary in the afternoon after victories in the morning semi-finals where Ewing won 3-and-2 over Ariya Jutanugarn and Popov took down Shanshan Feng, 1-up.

There would be no consolation match as Feng went 41 holes on Saturday and looked exhausted as she walked off after winning her quarter-final match.  Rather than head back into the oppressive heat, the Chinese star conceded the match to Jutanugarn knowing that the $22,000 difference in the prize money wasn’t worth the physical risk.

“I think I made the right decision for myself because I’m really, really tired after finishing six rounds in five days, let’s say four and a half days,” said Feng. “If I play 18 more, I don’t know how I will do. I might fall over on the course. I don’t think I should push myself that bad. You know, if I got in the top two, of course, yes, I would play until I fall down on the course. But I lost the match in the morning, and I think it’s better idea just to get rested after this. And then next week is the U.S. Open coming up. It’s a very hilly and challenging course, so, yeah, I just want to be well-rested and protect myself.”

As for Ewing, both she and Popov battled sloppy, tired-looking swings down the stretch but Popov couldn’t overcome Ewing’s determination.  Ewing ended it with a three-footer at the 17th to take a 2-and-1 win for her second victory of the season.

“It was exhausting.  I think I was limping in on the finish line really.  Fatigue was definitely a factor.  Four rounds of stroke play, 18, 18, 18, 18 is a grueling week, especially if you’re in contention,” said Ewing, who celebrated her first wedding anniversary on Sunday with husband Charlie cheering her on in the gallery.  “This week was unlike any other. I’m definitely going to have to tape up the feet I think for another week, but well worth it.”

The second major of the season will be played this week at the Olympic Club in San Francisco — the Women’s U.S. Open.

Bernd Wiesberger scored a career-first Sunday with his victory at the Made In Himmerland championship in Denmark.

It was the first time that Wiesberger has successfully defended a title.  He went wire-to-wire and dominated the final round with eight birdies and a closing 64.  He finished 21-under, five clear of runner-up Guido Migliozzi, whose 63 got him to 16-under.  Richard Bland and Jordan Smith tied for third with Aussie Jason Scrivener at 15-under.

Wiesberger’s win means no one has won more than his four titles on the European Tour since the start of the 2019 season – he joins world number one Dustin Johnson with that accomplishment and the victory will likely to lift him back into the Official World Golf Ranking’s top 50.

“It’s unbelievable,” Wiesberger said. “I’ve had seven chances (to defend a title) – I wasn’t successful the first six.  I’ve said it all week, I really like it here. Playing here is good for my confidence especially after a couple of tougher weeks, so it’s a special place for me.  It brings out the best in me. I got it going when I needed to so really enjoyable.”

Made In Himmerland Scoreboard: