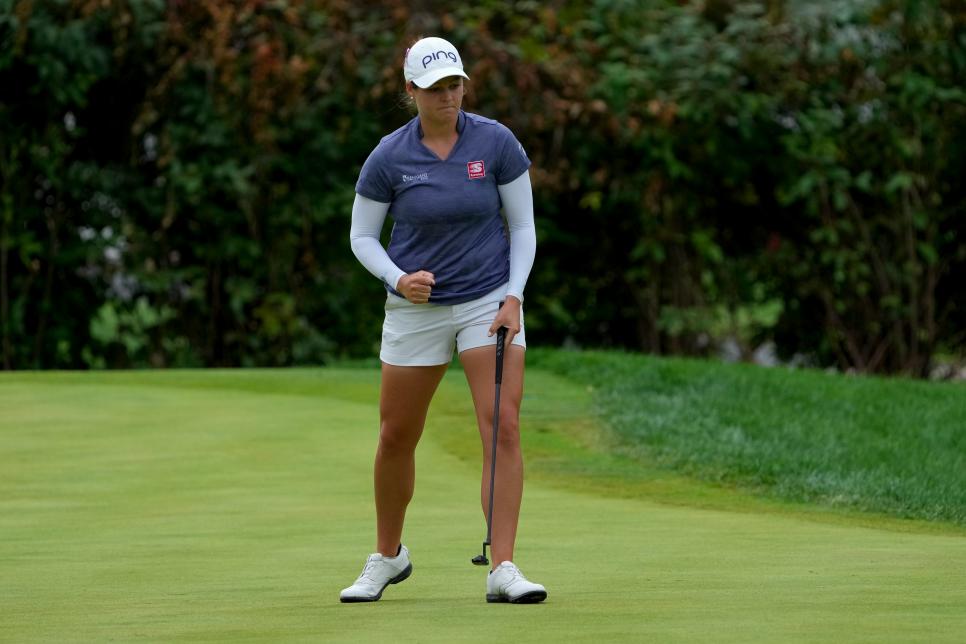 Posted By: Tom Edringtonon: September 12, 2022In: In Other News...No Comments

There wasn’t much excitement in Ally Ewing’s final round Sunday at the Queen City Championship — she was one-under par through 11 holes but then came a run like she hasn’t seen in well, a long time.

Ewing started a run of five straight birdies at the 12th hole and that carried her to a victory she desperately needed.

Ewing has reached the CME Group Tour Championship for the top 60 players every year since 2017, but things were looking bleak as she had gone the entire season to date without a top 10 finish.  She was sitting at 70th in the CME Globe points race, well outside the magic number — 60 — to get to Naples in November.

That incredible birdie run got her to six-under for the round and 22-under for the tournament.  She was locked in a battle with China’s Xiyu Lin as the two pulled away from the rest of the field over the final 18.

After a par at the 17th, Lin made it interesting with a birdie at the difficult 18th.  Ewing’s approach left her short of the green but she pulled her putter and rolled her approach to three feet.  After Lin’s birdie, she calmly sank the winning putt for her third LPGA Tour victory — one that shot her up to the 30th spot in the Race To The CME Globe rankings.

“The key for me is knowing it’s in there,” Ewing said after her win.  “The change I made a couple of weeks before Canada —  this week I saw putts go in. And once I saw them go in, I had confidence.”  The change Ewing referred to was shortening her putting stroke and it proved to be the difference this week.

“I did whatever I can do,” said Lin, who closed with a 65.  “I had one of the best rounds I played all year. I came out second, which is a little sad. But Ally played so well. Congrats to her.”

Maria Fassi of Mexico finished with a 71 and took solo third — her best career finish on the LPGA Tour.

Paddy Harrington is on a senior roll.

Harrington built a comfortable lead Sunday at Norwood Hills Country Club outside St. Louis, and went on to win the Ascension Charity Classic.

He’s now won two of his last three events on the Champions Tour and this victory made it three for the season.  In the process, he’s cut into Steve Alker’s lead in the race for the Charles Schwab Cup.  Alker’s lead is down to $134,778.  Harrington can possibly take over the lead next week at the Sanford International in South Dakota.