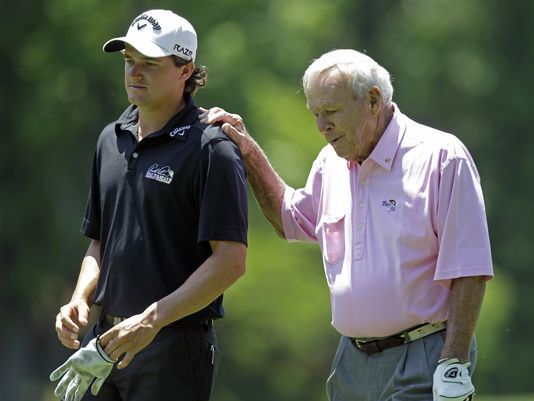 Sam Saunders shot a score his grandfather never could.

Posted By: Tom Edringtonon: September 28, 2017In: In Other News...No Comments

It was a year ago this week that the world lost golf icon Arnold Palmer.

His grandson celebrated his famous grandfather in a unique way Thursday at the Web.com Tour Championship.

Saunders, who is battling to keep his PGA Tour playing privileges, had the round of his life at the Atlantic Beach Country Club.  He played the back nine first and shot 31, nothing world-shattering.

He made the turn and birdied the second hole to get to six-under par for his round.  Then the run of a lifetime started at the third.  All Saunders did was birdie the final six holes of his round to shoot 28 coming home for the magic 59.  “My home course and my home town, it’s pretty special, doesn’t happen very often,” said Saunders after his round.  “I’m thinking about him (Arnie). I think about him every day.  I’m sure he would have been proud but I would have teased him because he never did it.”

Of course he’s the first round leader.  He’s three in front of Matt Atkins  and Steve Wheatcroft, who shot 62s.  Yet they found themselves riding backup to Saunders.

Four shots back after shooting 63s were Tyler Duncan and Ben Silverman.