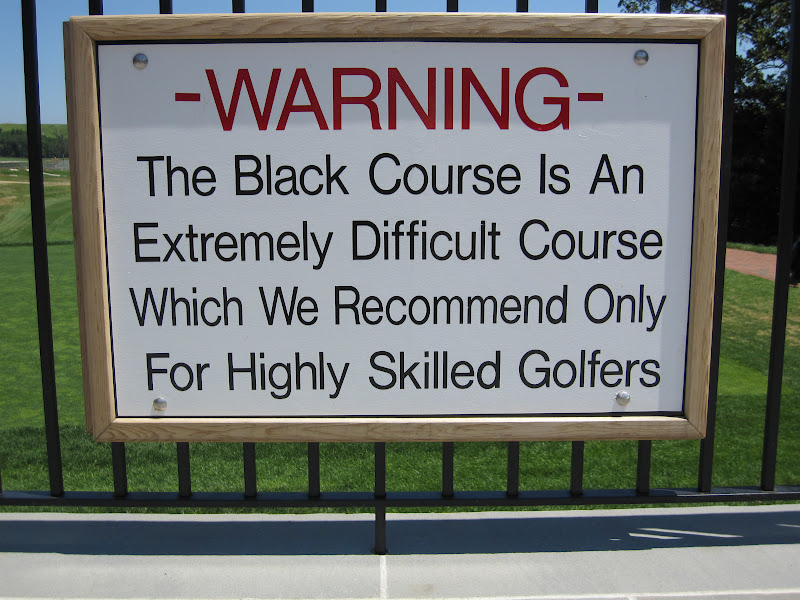 Hackers beware! Bethpage Black is not your kinda place.

Hackers watch out, you don’t have the length, the short game or the overall skills to get around Bethpage Black.

You don’t, face it, if you want, move on up to the Red Tees, no shame there, at least you will survive.

Don’t be like the caveman in the commercial and blurt out:  “Hey, we playin’ from the tips?”

No, here’s your “tip” — leave this one to the big boys because this is the ultimate “Big Boy” golf course, the place where Tiger Woods won the 2002 U.S. Open when he was in his prime, which seems like a lifetime ago.

Tiger’s prime is dead and gone and this golf course is the perfect starting point for the PGA Tour Playoffs.

No one talks about medals here. This is back to what our professional golfers really are — very highly paid mercenaries on a money and title mission.

Forget a Gold Medal, a Silver or a Bronze.  How about that big Sterling FedEx Cup? How about the $10 million pot at the end of this playoff rainbow?

Ten million Simoleans, ten million Smackeroos, one-hundred thousand Benjamins.  However you put it, it is plenty enough dough to get the attention of these multi-millionaires.

Which would you rather have?  Ten million or an Olympic Gold Medal?

No shortage of talent at Bethpage and talent it will take to conquer this layout that pushes 7,300 yards with a par of 70.  Woods was only able to get to three-under par IN HIS PRIME!!!! Mickelson finished second at even par.  That was it.

Tough is good, after all, it’s time to weed out the unworthy.

Day leads the FedEx standings, with D.J. second, then Adam Scott, Russell Knox, Spieth and Brandt Snedeker. Knox and Sneds are the surprise guys in the top six.

Spieth won it last year, he hasn’t been as good this year. Spieth has had a full three weeks off to get ready. Same for Day, D.J. too, ditto Rory and Scott. No excuses fellas, you’re all well rested and you will need all your wits about you this week at “The Black.”

This track will weed out the unworthy.

If you don’t have your game coming in, forget it, you won’t find it out there on The Black.

Better have some length and power, it will help.

Stay out of the rough.

That goes for the rest as well.

Spieth keeps telling us he’s the same player he was last year.

Here’s some time for redemption.

For Spieth and everyone else.

Oh, and don’t forget, you can always use an extra $10 million.