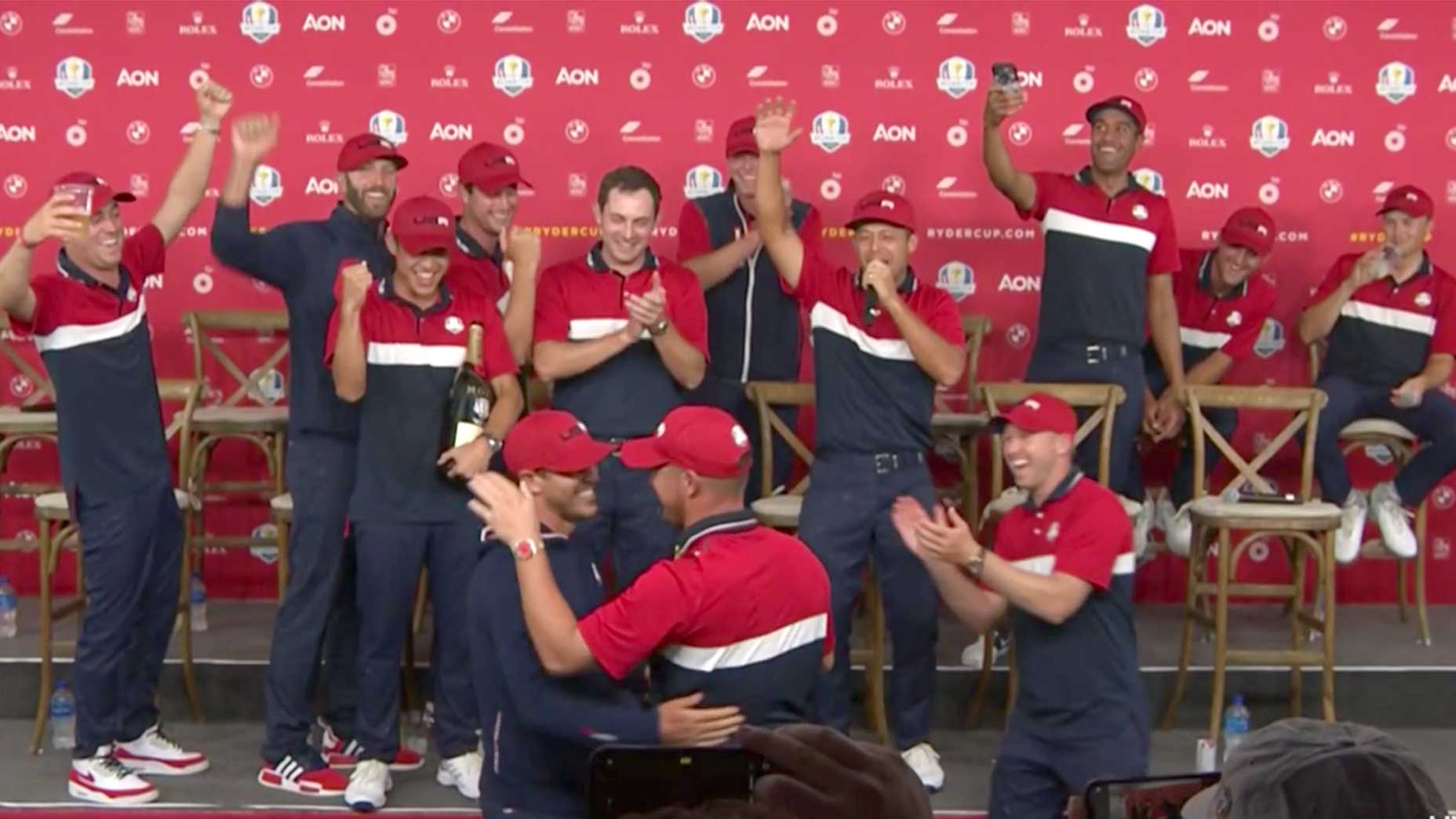 By popular demand, Brooks and Bryson hugged after the press conference.

Bryson DeChambeau, Brooks Koepka: Finally There Was A “Bro-Hug”

As the Ryder Cup matches were winding to a close late Sunday at Whistling Straits, it happened, quickly — it took just a matter of seconds but out on the course as the last of the players were finishing — there it was — a “bro-hug” between Bryson DeChambeau and Brooks Koepka.

Later, as the celebrating kicked in high gear and everyone was getting sprayed and doused with champagne, the team, already slugging down their favorite beverages, showed up together for the closing press conference.

Maybe players should drink all the time before answering questions as it sounded like a comedy hour but by the time things ended, there was one for the record:

By popular demand, Koepka and DeChambeau got together for one more “Bro-Hug” with some of the team singing the 1975 song by the group War — “Why Can’t We Be Friends?”

Xander Schauffele decided it was time for a victory cigar as the post-match champagne spraying began — most likely someone gave him a cigar because it was evident he had never smoked a stogie.

First thing Schauffele did was light the wrong end — that in and of itself was pure comedy.  He also didn’t know how to hold said cigar, taking it between his thumb and forefinger, not knowing the standard “cigar grip.”  He should have consulted with Michael Jordan, who was on site for the matches.

In the post-game press conference, Schauffele was there, the cigar was still there and Schauffele looked like he was working on turning his facial coloring to light green.

Europe only came up with nine points — six of them came from Jon Rahm and Sergio Garcia.  Rahm went 3-1-1, Garcia 3-1-0 the other three points came from Lee Westwood, Ian Poulter and Rory McIlroy who scored one each.

One guy who WASN’T a contender for the Nicklaus-Jacklin sportsmanship award for the American team was surly Brooks Koepka.

During the Saturday morning foursomes (alternate shot) session, Koepka was playing with Daniel Berger against Jon Rahm and Sergio Garcia.

Koepka was playing Berger’s drive on the 15th.  The ball nestled into tall grass near a bunker, and nudged up against a drain pipe. Koepka and Berger believed that was enough to get relief — i.e., a free drop — and even Garcia agreed with them.

But course officials decided that the pipe, which was ahead of Koepka’s shot, wasn’t close enough to warrant relief.  After a long round of arguing and Koepka asking for the head official, it was still determined that Koepka had to play the ball where it was.

As the officials stepped away, Koepka motioned at both of them and said loudly:  “If I break my wrist it’s on fucking both of you!”

In most sports, you curse at the officials and you’re booted from the game.  Koepka’s actions could have been grounds for a loss-of-hole penalty but he officials ignored him.

For the record, Koepka hit the shot and got the ball on the green.  No injury, no jolt, no nothing from the wispy grass.