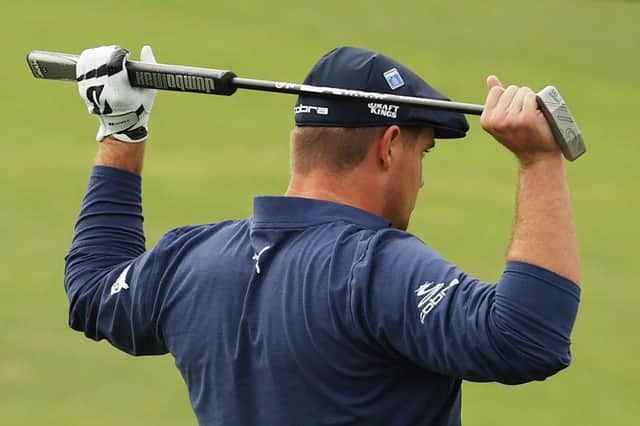 Bryson DeChambeau turned his back on the PGA Tour and became the Invisible Man.

Seems like it was yesterday when Bryson DeChambeau was arguably one of the most talked-about players in the world of golf.

He came to the PGA Tour with a different way of playing the game then he went even farther, becoming the Incredible Bulk and swinging harder than summer rains in southeast Asia.

It didn’t take him long to go chest-deep in the waters of controversy.  He showed that he could easily becoming arrogant, immature, disrespectful to PGA Tour officials and camera-toters — he was basically your human golf lightning rod.

It became pretty routine for Bryson to open his mouth and insert one of his Pumas.

But the guy won and attracted attention.  He was the long ball on Tour.  The stars aligned for him at the 2020 U.S. Open — he won at both Arnie and Jack’s place.

Bryson was anti-conventional wisdom in the world of golf.  He was a walking, talking train-wreck — you couldn’t not watch or not listen.

He was in all sorts of commercials — Cobra-Puma, LA Golf, Rocket Mortgage.  He was Mr. Brand Ambassador with a satchel full of endorsements.

Then he chose the Dark Side Of The Force.

Bryson turned his back on the PGA Tour for nine-figure money from the dirty coffers of The Infidels (aka The Saudis) and signed a LIV contract.  He was a world-class player in his prime at age 39, unlike the over-the-hill classics like Phil Mickelson, Lee Westwood, Pat Perez, Ian Poulter, Graeme McDowell and Sergio Garcia, to name a few.

No, Bryson had the ability to chase history and legacy, but chose the money instead.  He was undefeated in three matches at the 2021 Ryder Cup and was a crowd favorite with his tape-measure tee shots.

But that’s all gone.  Perhaps the wrist injury was a wake-up call for Bryson along with a hip injury and back issues.  Perhaps he knows that the way he swings and how hard he swings means he’s on a pitch-count that could shorten his effective playing days.  And he’s been incredibly ineffective through five LIV events, notching a couple of 10th place finishes in fields where he should have won and been a threat to win every time the circus came to town.  He’s yet to be in final-round contention.

He’s still managed to say some stupid things.  He even went so far as saying Tiger Woods is the reason LIV exists:

“I have high regard for Tiger; look, this (LIV) wouldn’t be existing if it weren’t for Tiger,’’

Seriously?  Tiger is the living, breathing anti-LIV.  Tiger made his billion the old fashioned way — he earned it.  Woods thrived thanks to a sharp, competitive edge, honed in a sport where you make what you earn.  Play well, you prosper.  Play poorly and you look for a new career.

That’s not the case with massive up-front, guaranteed money, 54-hole shotgun starts, 48-player fields with no cut and obese purses for each event.

Truth be known, The Infidels made DeChambeau a featured target, spotting him north of $125 million to defect.  Now Bryson doesn’t need to practice as much and it’s highly likely he’s not.  He took time to show up and finish second a few weeks back at the WLD’s National Long Drive competition in Nevada.  He finished second and that’s probably going to be the high point of his golf season.

Ironically, DeChambeau’s poor behavior toward the media continued there where he blew off the U-Tube folks who carried the event.  And U-Tube is the only medium that touches the LIV.

DeChambeau and the rest of The Defectors run for the hills when questions come about the Saudi money.

And things have gotten worse in that regard. The Saudis are now aligned with Russia in cutting oil production.  In the name of money, the Saudis are pals with Vladimir Putin, the single greatest threat to world peace this new century has experienced.  Ask anyone from Ukraine.

Yes, DeChambeau has become an Invisible Man, a far cry from the guy who found new ways to get himself in trouble on the PGA Tour.  Like the time he bullied a camera-man at the 2021 Rocket Mortgage then had to nerve to accuse the camera guy of doing damage to his brand:

“We’re not necessarily — we don’t mean anything by it, we just care a lot about the game. For that to damage our brand like that, that’s not cool in the way we act because if you actually meet me in person, I’m not too bad of a dude, I don’t think.”

Not sure if Bryson is a good or bad dude, no one really got to know him that well.

What we do know is that he sold out to a lot of bad dudes.  Just ask Phil Mickelson, The Defector In Chief, who called the Saudis “Scary Mother Fuckers” then promptly, and gladly accepted $200 million of their dirty money.

Phil then disappeared from the golf landscape.

So has Bryson.  And while Bryson counts his money, perhaps he should stare in the mirror and ask himself if he is, really, indeed,  “not too bad of a dude.”