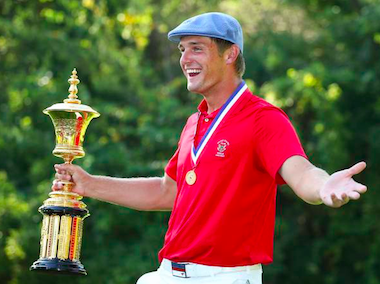 DeChambeau is also the reigning NCAA individual champion and with his Sunday 7&6 victory over Derek Bard of the University of Virginia, he became one of the elite few to hold both titles.

“I’m in golf history. I don’t understand it yet. That’s an honor to be in that field,” said DeChambeau after his victory at Olympia Fields.

Closer examination reveals he’s more than just another accomplished player. He’s a physics major at SMU, he’s quirky, a techie and maybe somewhat of a mad scientist when it comes to the technical side of golf.

He’s unique in the fact that he’s one of those players who has irons that are all the same length, including wedges. He had them custom made by Edel Golf and it takes a lot of tinkering to make a set right when you’re talking about the same length shaft for every iron.

He’s a student of The Golfing Machine by Homer Kelley. The last well-known guy who studied it was Bobby Clampett.

He uses the vector putting method to align his putts, nothing simple. He has developed two different swing speeds with his driver. His control swing is 112 mph, his rip-it speed is 127 and he can fly it 340 yards in the air if he wants.

DeChambeau even looks different on the course, he wears those Kangol caps much like another former SMU golfer, the late Payne Stewart.

DeChambeau is a one-plane swing guy, per the Golfing Machine teachings. He is extraordinary analytical on the course and that sometimes makes him a bit deliberate or slow, as most of us say.

His win at the amateur has opened some great doors for him. He will play in the 2016 Masters and the 2016 U.S. Open where he will be paired with champion Jordan Spieth, who is not much older than DeChambeau.

The victory also gets him an Open Championship spot.

He’ll play on the Walker Cup team and he’s headed back to school for his last year.

Hopefully soon, we’ll get a look at this guy on the PGA Tour.