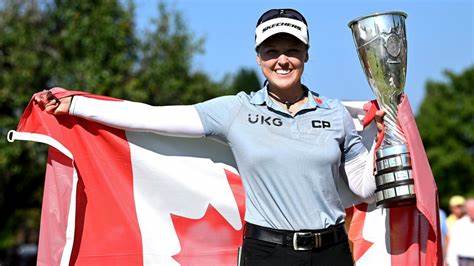 Canada’s golfing sweetheart — spunky Brooke Henderson — showed a lot of determination and moxie on Sunday over in France as she overcame a lousy start and went on to win her second major championship — the Evian.

She started the day as the 54-hole leader.  But things didn’t start the way she wanted.  She bogeyed the first hole then saw things come apart at the seventh where she four-putted and walked off the green with a double-bogey.  Her two-shot lead was gone but she was undaunted.

“Yeah, it was definitely an interesting day,” she recounted.  “Not the start that I wanted, but I stayed pretty patient, as patient as I could under those circumstances. Then going into the back nine, you know, the saying is that majors are won on the back nine on Sunday, so I just tried to keep that frame of mind, and knew I was still in it if I could have a solid back (nine).”

Up ahead, unheralded Sophia Schubert was making a move.  Schubert, ranked a lowly 238th in the world, birdied 11, 12 and 15 but failed to make a closing birdie at the par five 18th.  She shot 68 and posted 16-under as Henderson’s target score to beat.  It was Schubert’s best finish ever as a pro.

Henderson regained her composure and made nice birdies at the par three 14th and par five 15th to tie Schubert at 16-under.  Pars at 16 and 17 set the stage for a dramatic finish at 18.

Brooke’s drive found the left rough and she hit a lay-up to 107 yards.  From there, her third stopped nine feet from the hole, giving her a solid look at a winning putt.

All she did was step up and knocked it square into the bottom of the cup.  Her 71 was good enough for a one-shot win at 17-under par.

She made all sorts of history.  Her opening rounds of 64-64 on the Evian Resort course marked the first time an LPGA player opened that low with her first two rounds in a major championship.

At the end of this one, some of Henderson’s fellow players came out and soaked her with champagne.

But you get the feeling at the tender age of 24, she had more victories ahead and more majors to come.