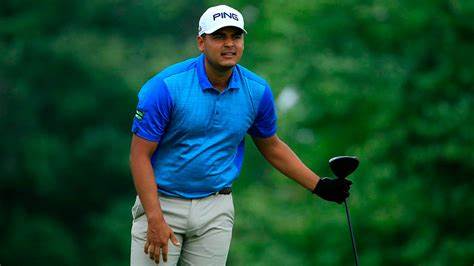 Sebastian Munoz's first round scorecard had eight birdies and a eagle.

Sebastian Munoz had a day to remember on Thursday at the RSM Classic.

All he did was dismantle the Seaside course at Sea Island with a 10-under par 60 — his best round as a PGA Tour member.  “I was proud of how I played,” said Munoz after sniffing the magic 59 number.  “I just about hit every green and gave myself birdie looks on every hole.”

Munoz led a scoring spree thanks to perfect weather that won’t be so perfect come Friday.  After a calm day where scoring on the Seaside course was nearly 66, strong winds from the north are expected to sweep Sea Island on Friday, Saturday and Sunday with gusts up to 35 miles per hour.  “I haven’t really looked at the forecast,” Munoz said when asked about the pending difficult conditions the rest of the way.  “I don’t know how much it’s going to blow tomorrow or if it’s going to be cold or not, so I’m just kind of here right now and I’ll adjust tomorrow and see what happens.”

As well as he played, he was only a shot better than Sea Island resident Zach Johnson, the former Masters and Open champion.  Johnson finished his day with 61 at Seaside.  He had a really good shot at shooting 59.  He was nine-under for his round through 15 holes after making a seven-footer for birdie at the 15h.  Coming home, he missed birdie attempts from 10, 20 and 25 feet on the final three holes.

It will take two rounds to see where the field stands as play took place on two courses — the Seaside and the Plantation.

Another four players were in at eight under — Russell Henley, Jhonny Vegas and Taylor Gooch shot 64 at Plantation, Corey Conners had 62 on the Seaside.

Jordan Spieth is now a daddy.