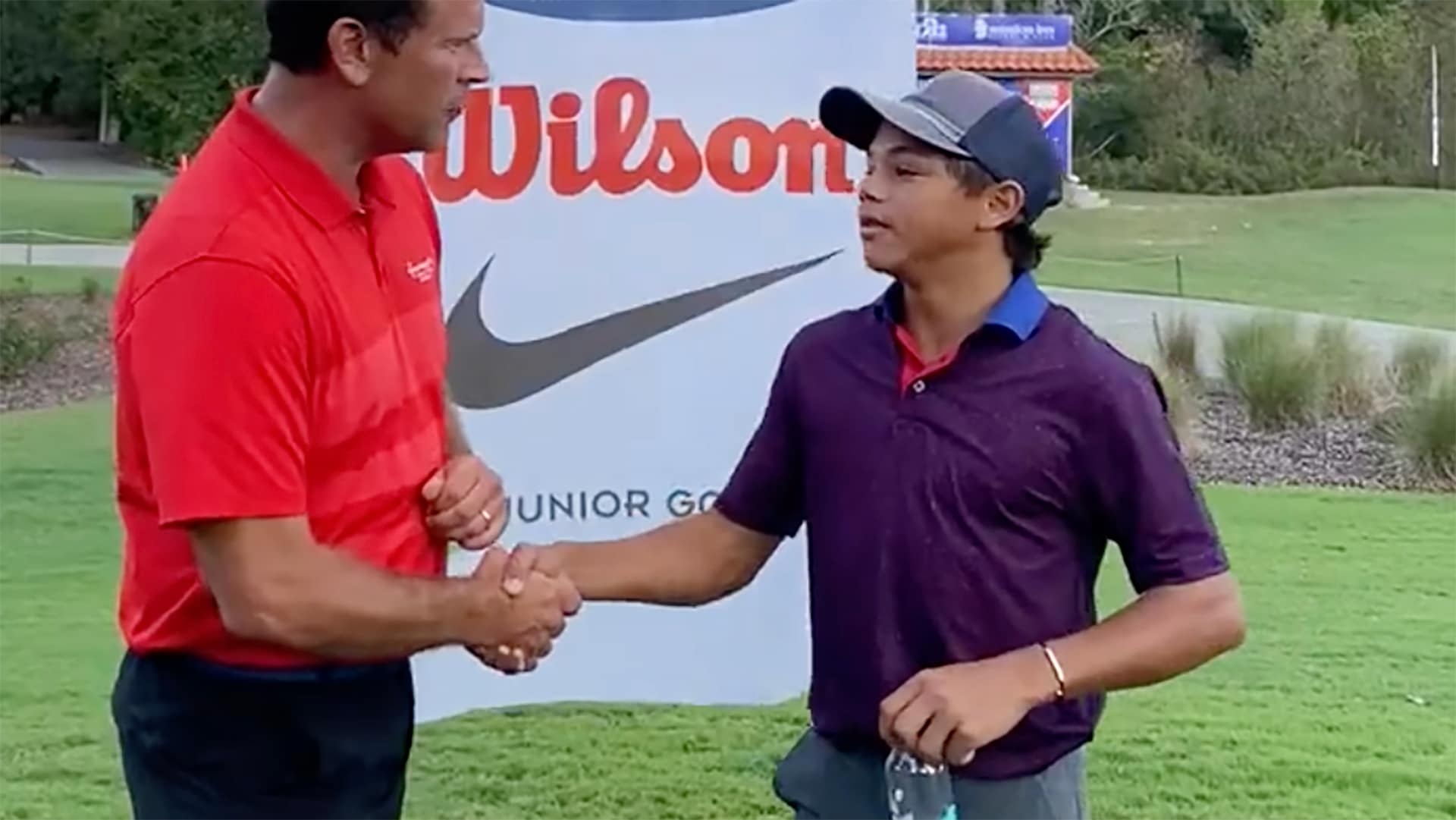 Charlie Woods is 13 now and he's beginning to fill out.

Posted By: Tom Edringtonon: September 29, 2022In: In Other News...No Comments

When the PNC Championship, the old Father-Son competition, rolls around this coming December, people are going to be surprised when they see Charlie Woods.

At last year’s PNC, Charlie was a huge hit with the galleries and the television audience as a 12-year-old playing along side his famous father.

Charlie is now 13-year-old.  He turned 13 last February and will be pushing 14 by December when the PNC is held.  First thing folks are going to notice is that Charlie is getting bigger and stronger.  And his game is taking shape.

Last week Charlie competed in a qualifier for Notah Begay’s national junior event.  The Florida qualifier was held at the Mission Inn Resort located in Howey-in-the-Hills, not far from Orlando.

Charlie got off to a difficult start with an 80 in the first round.  But he bounced back with a career-best 68 in the second round.  He finished fourth in the boys 12-13 division at four-over par for the 36 holes and just missed out on going to the national event.  Of course, his dad was on the bag.

Charlie went out in the second  round and shot one-over on the front nine but he played well on his back nine, recording two birdies and an eagle on the par-5 14th hole to come home in three-under 34 and shot 68. His approach shot lipped out for albatross on the 14th.  “When I hit (the approach), I knew it was good,” Charlie said. “When it started trickling down, I knew it was going to be close, but not that close.

Apparently, when Patrick Reed got win that the  Houston judge for his defamation suit against The Golf Channel and Brandel Chamblee is a real stickler for the rules of golf, well, it was time to bail.

So now Reed’s controversial attorney, Larry Klayman, has re-filed the complaint, changing from the Houston court to the U.S. District Court for the Middle District of Florida, which happens to be in Jacksonville.

And it seems suing The Golf Channel and Chamblee wasn’t enough for Reed.  Damon Hack, Shane Bacon and Eamon Lynch have been added to the complaint.  Lynch writes for Golfweek and Golfweek is named as a defendant along with the Gannett Company, which owns Golfweek, USA Today and other publications.

We already know Reed is suing for $750 million.

What’s also interesting is that Klayman has had his license to practice law suspended in the District of Columbia.

Given the long list of defendants, Klayman will no doubt be up against a small army of highly-compensated barristers.

Good luck with that.

The Lamest Commissioner Denies Reports Of LIV And Fox Sports 1:

The last time The Lamest Commissioner In All The Land (aka Greg Norman, aka The Great White Fish Stick) was giving updates on broadcast opportunities for his LIV-circus/exhibition series, he claimed that at least four entities were falling all over themselves, begging to broadcast the circus.

Well, reports this week came out that LIV was actually trying to purchase air time on Fox Sports 1 so that there would be actual television for the series.

Note LIV was buying  the time as sponsors are making sure they are staying far away from the Infidel-funded golf events.

Well, The Lamest Commissioner said it’s not true.  He had a few of his PR henchmen put together this “statement”:

Reports that LIV Golf is close to a deal with Fox Sports that would see it buying air time look to be wide of the mark.

“Recent reports about media rights have been incomplete and inaccurate. LIV Golf has exceeded expectations and remains ahead of schedule across numerous fronts, including broadcast rights.

“As we have stated previously, LIV Golf is just beginning its process and is in active discussions with several companies about broadcasting the LIV Golf League. We caution that no one should draw any conclusions about potential media rights given that we are still in the middle of negotiations with several outlets.”

Buying time on Fox Sports 1 may end up as the only alternative.  So instead of “getting” something for the broadcast rights, well, The Infidels might have to throw a few hundred million at Fox.

Last week’s winner on the LPGA Tour,  world No. 3 Atthaya Thitikul, kept up her great play Thursday when she opened with a five-under par 66.  Thitikul wsa just a shot back of first round leader Xiyu Lin.

It was a sunny but breezy day at the Great American Golf Club.  One player who had a huge struggle all day was world No. 2 Nelly Korda.  Korda, one of the pre-tournament favorites, shot a four-over par 75.