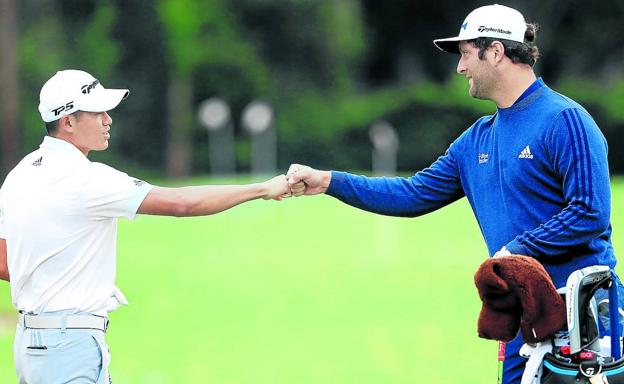 Collin Morikawa and Jon Rahm should both be factors in the FedEx playoffs.

So now those money-laden FedEx Cup “playoffs” are upon us, it’s a three-week, obese money grab that gets underway Thursday at Liberty National.

FedEx shareholders will be pleased to know that this publicly-owned company is forking out some $60 million to fatten the wallets of various PGA Tour millionaires.

At the end of this PGA Tour-created rainbow is the $15 million pot that awaits the winner of the Tour Championship.  You see, the Tour came up with that crazy, let’s-give-handicap-shots to the best players on earth so that we don’t have to hand two trophies (the FedEx Cup its ownself, and the Tour Championship) to two different players.  That’s been deemed a bad look.

The lucky fella who collects both and banks that extra $15 million, will win more money than say a guy who won the following this season:  Both the Northern Trust this week and the BMW next week, The Masters, the PGA Championship, the U.S. Open and the Open Championship.  All totaled, those six events paid $11.97 million, about $3.03 million short of that $15 million FedEx haul.

Now that we’ve put that in perspective, let’s get to more of this playoff nonsense.

When you say playoffs, you think NFL, at least most of us do.  In their playoff run players for the Tampa Bay Buccaneers won $59,000 each for winning the NFC title, then another $130,000 each for dumping the Kansas City Chiefs in the Super Bowl.

Truth be known, second place to the eventual FedEx Cup winner pays $5 million, $4 million for Mr. Third Place, $3 million for fourth and $2.5 million for fifth (are you listening, Tony Finau?).

Of course there’s the old argument that these lads will pump a lot of money back into the economy, especially if you own NetJets, as Warren Buffett does.  Warren thanks you, fellas.

Now comes the tricky part as you try and figure who will be the lucky guy that gets that “10 Handicap” for the Tour Championship.  Last year Dustin Johnson got it, he started 10-under, ended up shooting 11-under, pre-handicap and won it all at 21-under.  Justin Thomas tied him at 11-under and D.J. didn’t shoot the low score at East Lake.  That honor went to Xander Schauffele, who in our eyes was the de facto winner as he shot a “Gross” 15-under par.  Perhaps The Sheriff Of Nottingham (aka Tour commish Jay Monahan) should have “Low Gross” and “Low Net” divisions like you have in your local club championship.

Now Collin Morikawa is already a huge winner this season with a WGC victory and the Claret Jug.  On top of that, he was awarded a fast $2 million for ending the regular season with the most FedEx Cup points, another bonus pool forked out by ComCast.

Now there’s one problem for Collin.  As these next two playoff events get underway, the Tour, in its infinite wisdom, stacks the deck by award four times the normal points for wins in the Northern Trust and BMW than it gives out during the regular season.  That sounds pretty fair, doesn’t it?  At least they’re not making everyone start at zero.

Your top three points guys heading to Liberty National are:  Morikawa, Comeback Kid Jordan Spieth and sleepy Patrick Cantlay.  World No. 1 Jon Rahm is a lowly fifth on that list so Jon, get the lead out.

So pay close attention this week at Liberty National, the new site of the Northern Trust and the BMW at Caves Valley in Owings Mill, Md., another new site.

Someone’s gonna emerge as a 10-handicapper.

In our little world of amateur golf, that ain’t so hot.

But at the Tour Championship, it’s like going into a boxing match and the other guy has to tie one arm behind his back.