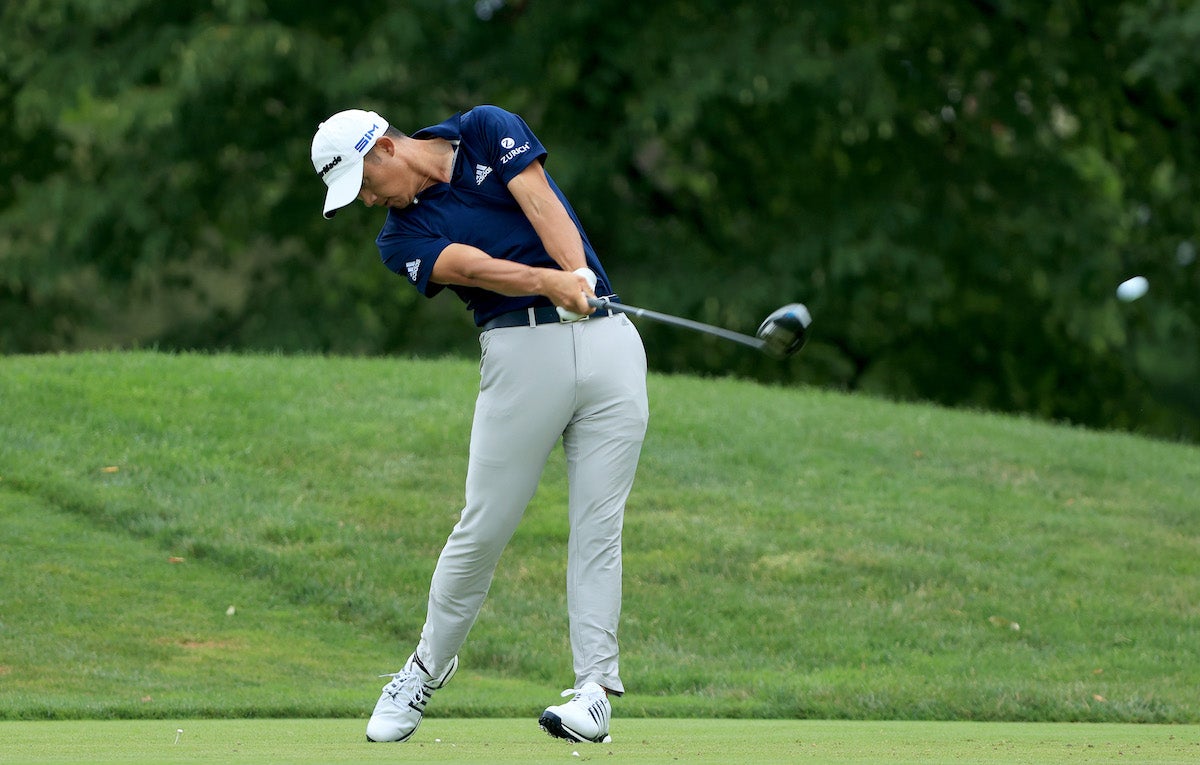 At impact, Collin Morikawa's left shoulder moves up and he's pushing off the ground with his right foot.

Collin Morikawa: There’s A Lot To Love About His Fluid Swing

Posted By: Tom Edringtonon: August 13, 2020In: The Lesson TeeNo Comments

It’s easy to see why Collin Morikawa won the PGA Championship last Sunday when you consider the following:

He led the field in accuracy off the tee.

He was first in proximity to the hole with his approach shots.

He was first in strokes gained putting.

That all adds up to victory.  It’s a tough task to lead a major championship field in all of those categories but Collin did just that.

Today, we’re looking at his golf swing to see what he does, how he does it and hopefully, we can emulate a few things that he does with his swing.

His setup is perfect.  That’s one of the things that has stood out about Tiger Woods throughout his career — perfect setup.

Collin’s takeaway is superb.  He gets the club going back low and keeps it in line with his chest.

He sets the club at the nine o’clock point in the swing, about halfway back and from there, he just rotates and takes it to the top in perfect plane.

After you look at the video, and it’s one you never get tired of watching, you notice the flexion of his left wrist at the top.  It’s not as pronounced as Dustin Johnson’s, but it’s there.  This helps stabilize the club face.

That flexion increases slightly into the hitting area and he simply rotates his body to create speed.

Look at the video and notice how he keeps his head well behind the ball at impact.  That’s something everyone out there should work on, religiously.

But Morikawa’s go-to shot is the fade and that serves him well when you have to keep the ball in play and when the pressure was intense last Sunday, he didn’t flinch.  He hit really, really good golf shots.

The tee shot at 16 speaks volumes — it’s the type of shot that champions produce at the right time.

When you watch the video, another will follow where Morikawa shows how to hit different trajectory shots with the driver.

This kid’s a keeper and his swing is classic.