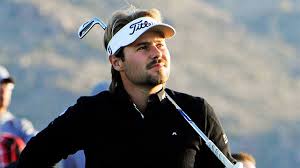 Victor Dubuisson finished birdie-birdie to win in Turkey for the second time.

Victor Dubuisson got his first European Tour win two years ago at the Turkish Airlines Open against a world-class field that included Tiger Woods.

He has been searching for that magic ever since and finally found it on Sunday at the Montgomerie Maxx Royal.

Just as he did two years ago, Dubuisson birdied the final two holes and got the win after a heated battle with Jaco Van Zyl and Kiradech Aphibarnrat.

The three were paired together. Van Zyl and Aphibarnrat were tied at 20-under with five holes to play, Dubuisson was a shot back. Van Zyl took the lead by himself with a beautiful tee shot at the par three 14th that left him just five-feet from the hole.

Dubuisson made a sweet 15-footer for birdie at the 17th to tie Van Zyl heading to the last hole, a 580-yard par five.

It was there that Dubuisson would hit two incredible back-to-back shots. His drive was perfect, it caught a slope on the right side of the hole and didn’t stop until it had traveled nearly 370 yards. Van Zyl was far behind and had better than 260 yards for his second. That shot went just over the green and a bit wide right.

Dubuisson then hit perhaps his best shot of the final round. From 210 yards out, he feathered a perfect shot that ended just 12 feet from the hole, leaving him a nice putt for eagle. He wouldn’t need it. Van Zyl two-putted for par and Aphibarnrat missed a two-foot birdie putt that would push him into solo third.

The dashing Frenchman calmly two-putted for his second victory and openly wept tears of joy afterward.

It marked a great comeback for him. After his win last year, his game went into a slump and he slipped from 17th in the world to 69th. This win will set him back on course. The win moved Dubuisson into seventh place in the Race to Dubai, but more important, it brought back his confidence.

“Sometimes you feel like your game is never going to come back,” he said. “And this week I realized that my whole game was here.”