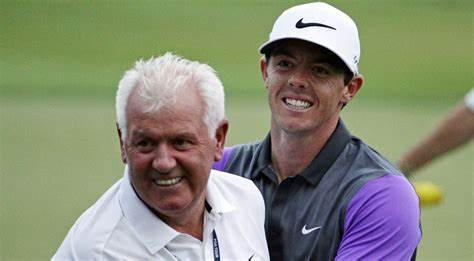 Rory McIlroy will team with his father Gerry in the pro-am competition.

Dunhill Links — How About The Old Course, Carnoustie and Kingsbarns?

It might be the best pro-am on the face of the planet — the Alfred Dunhill Links Championship.

The DP World Tour heads to Scotland this week and this event has some serious venues.  How about The Old Course at St. Andrews, Carnoustie and Kingsbarns for the first 54 holes of this incredible pro-am?

After a much needed rest, Rory McIlroy will head to the East Lothian region of Scotland along with his dad, Gerry, who has become quite the fixture back in Palm Beach County at prestigious Seminole Golf Club.  Gerry even has a nickname — “The Mayor.”  Gerry will team with his son, the current world’s No. 2 who has had quite a season.

Rory will also get two more rounds at St. Andrews, where he was right in the thick of it at the Open Championship last summer.

This one is the same format at the Pebble Beach Pro-Am — each pro with an amateur.  The cut for both comes after 54 holes with the final round at St. Andrews.  The low 60 professionals and tie stick around for the final round on The Old Course and the low 20 amateur (and their pros) make it to the final day.

Rory’s not the only name player in this field.  He’ll be joined by Shane Lowry, Tommy Fleetwood, U.S. Open champion Matt Fitzpatrick, Tyrrell Hatton, Francesco Molinari, Presidents Cup U.S. team member Billy Horschel and last year’s winner — Danny Willett.  Willett shot 18-under and beat Hatton by two shots.  Lowry finished at 15-under and should be in the thick of it come Sunday at The Old Course.

Hatton has a chance to make some DP World Tour history.  No player has won this event three times and this marks the 21st playing of this really cool pro-am.  Hatton came close last year, finishing runner-up to Willett and will go for that third title.  Paddy Harrington, who has been enjoying life as a winner on the PGA Tour’s Champions Tour, is back in the U.K.  Paddy has won this event twice and he’s added distance as he passed the age of 50.

Willett has been making a comeback of sorts and it started at this event last year.  Two weeks ago Willett had a short putt to win the Fortinet Championship in California but suffered a devastating three-putt from just inside four feet to hand the title to Max Homa.

Then there are The Defectors.  Yes, these DP World Tour events are plagued by them.  Last week it was Patrick Reed floundering at the French Open where he shot 73-72 at Le Golf National and missed the 36-hole cut.  In the process, Reed is now out of the top 50 in the world rankings, dropping to 51 and destined to drop more, like the rest of the LIVers.  Golf Channel/Brandel Chamblee-suing Reed had planned on playing this week but good old “Table For One” apparently slept on a lumpy mattress (how appropriate) in France and now his back hurts.  Maybe he’ll end up suing the offending hotel.

Defectors in the Dunhill Links field not named Reed include Talor (the) Gooch, Louie Oosthuizen and Charl Schwartzel.  There are others, but you wouldn’t recognize the names unless you’re a big Jediah Morgan fan.

As far as Defectors are concerned, the DP World Tour is giving them the cold shoulder, sort of.  Reed complained last week about not getting to play in the French Open pro-am the Wednesday before play started.  Of course, Reed complains about nearly everything — thank goodness he’s not in the field this week — saves some poor amateur from the misery.

But there’s no misery when it comes to playing on these venues.