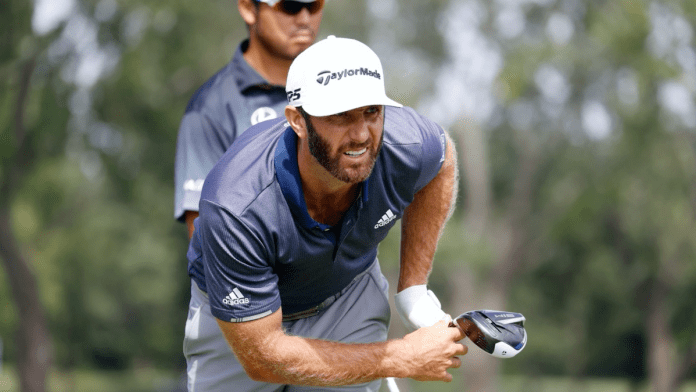 Dustin Johnson struggled to find fairways off the tee and paid the price.

But with the PGA Tour’s handicapping system, Johnson is clinging to a one-shot lead t the halfway mark at East Lake.

Johnson hit only two fairways and paid the price on day two.  D.J. birdied the 18th to shoot even par and remain at 13-under par, a single stroke in front of Sungjae Im.

If this were a real tournament, the leaderboard would look like this:

But with the PGA Tour’s wacky handicap system, Johnson has the lead at 13-under after rounds of 67 and 70.  Im goes into moving day just a shot back at 12-under while Schauffele is just two back at 11-under.

Justin Thomas wasn’t as sharp as he was on Friday.  His 71 put him at 10-under as a total of four players are in double-figures under par.

Jon Rahm had an awful time on day two.  Like his playing partner, Johnson, he had trouble finding fairways and struggled on the back nine.  A tee shot in the water at the par three 15th resulted in double-bogey and a poor layup at the final hole led to a bogey on the par five.  Rahm shot 74 and fell back to nine-under with Collin Morikawa (65) and Hatton.

Rory McIlroy struggled and on 18, his drive went through the fairway.  With the water just in front of him, McIlroy could have easily put his second just short of the green but he smother-topped his second and it went all of 15 feet, straight into the drink. A bogey to finish left him with 71 and he’s eight-under, five back of the leader and in need of a low one on Sunday.