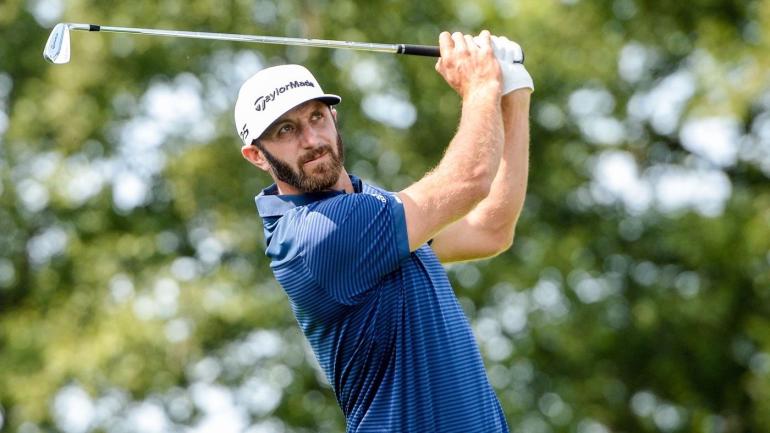 Dustin Johnson opened with a 66 at the TPC Boston on Friday.

The Dell Championships got off to the traditional Friday start and Dustin Johnson picked up where he left off last week when last we saw him crushing Jordan Spieth at the Northern Trust.  Here’s how day one of the Dell transpired:

Dustin Johnson has a chance to turn the playoffs into a one-man-show.  He got off to the start he was looking for on Friday.  His best moment came on his ninth hole of the day, the very reachable par five 18th.  Johnson hit his second from 129-yards within five feet and sank the eagle putt.  He would go on to shoot 65, six-under par and is the first round leader.

Jon Rahm and Sergio Garcia are the biggest names close to him.  Both finished their round in the afternoon wave and shot 67s.  Marc Leishman and Kyle Stanley joined them.

Phil Mickelson continues to make his case for a spot on the President’s Cup team.  Lefty shot 68, two-under, as did his younger pal, Rickie Fowler.

Jordan Spieth headed a list of big name stars who struggled at the TPC Boston.  Spieth finished his day with a 72, one-over.

Rory McIlroy continues to look out of sorts.  He had his good moments and bad, which has been the story of his season.  McIlroy shot 72.

Brooks Koepka continued to lay an egg in the playoffs.  His 74 left him in a tie for 69th.

This may be the end of the season come Saturday for Bubba Watson.  His 75 left him on the wrong side of the projected cut line.  If that’s the case, we won’t see Bubba for nearly five months.

Hideki Matsuyama saved his day with his second shot into the par five 18th to finish his round.  He came into the hole three-over but his approach stopped inside four feet and he sank the eagle putt to shoot 72.