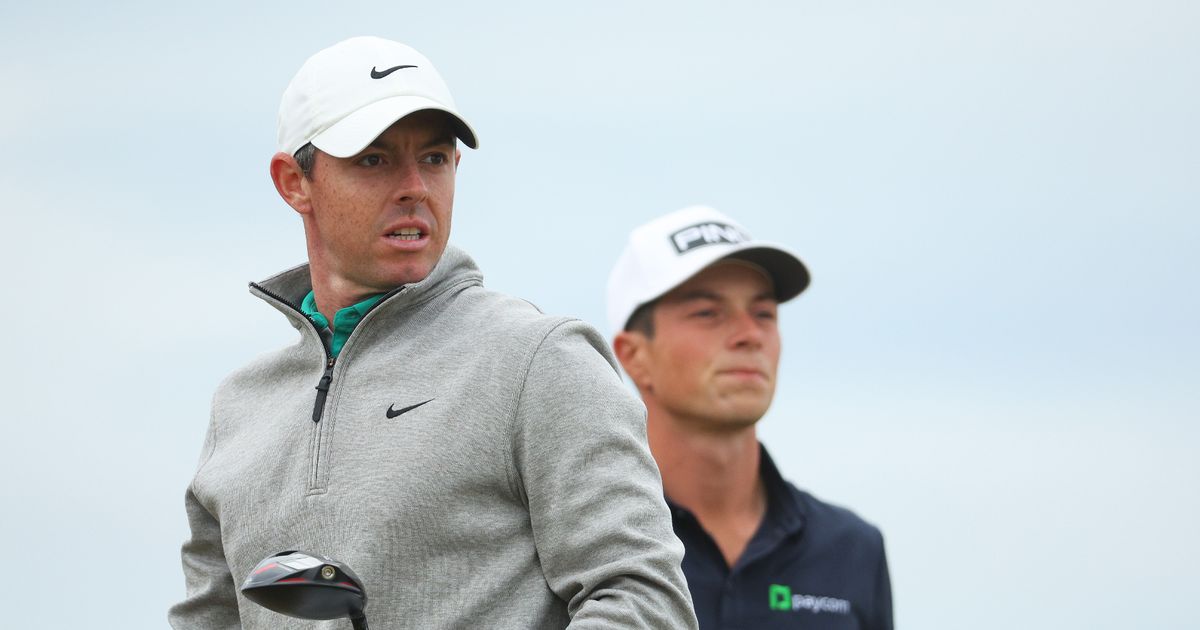 Rory McIlroy and Viktor Hovland both shot sparkling 66s on moving day at The Old Course.

Rory McIlroy and Viktor Hovland — two of golf’s outstanding young talents — separated themselves from the rest of the field on Saturday at the 150th Open Championship and lead by four with 18 holes to play.

McIlroy and Hovland went head-to-head all day in a show of power, finesse and precise putting.  Both shot six-under par 66s and stand alone at 16-under par heading into the pressure cooker that is Sunday at the season’s final major championship.

“I thought I did really well,” said McIlroy, who got off to a slow start, missing birdie putts inside 10 feet at the first, third and fourth holes.  “I didn’t capitalize,” McIlroy explained.  “But my patience was rewarded after the turn.”  It was rewarded in a big way when McIlroy pulled off the shot of the day at the par four 10th where his drive found the bunker short of the green and from 82 feet away, hit the perfect blast that landed on the green, took a couple of short bounces then rolled perfectly into the hole for eagle.  “Pretty cool, a little bit of luck as well,” was how McIlroy described the shot that really got him going.  “Sometimes you need a little pick up like that,” he added.

From there McIlroy added pars until he hit the 14th with a perfect drive and massive iron shot into the green for an easy two-putt birdie that took him to 16-under par.  He gave a shot back at the tough 17th where second turned into a flier that sailed the green an bounced off the boundary wall at the famous Road Hole.  Without much room, Rory ran it up but left it 20 feet short of the hole and made his only bogey of the day.

Hovland went long as well but was just over, in the gravel behind the huge slope.  He used his putter and pulled off a great save, getting his third to within four feet.  His par tied him with McIlroy at 15-under and both finished with easy birdies at the 18th.  Hovland turned in the only bogey-free round of the day.

“Certainly (I was) pretty nervous out there but I handed it well,”  said the world’s No. 9. “If I can shoot 66 in today’s conditions, I don’t see why I can’t do it tomorrow.”

McIlroy and Hovland will go off in the final pairing late Sunday.  “It’s a comfortable pairing for both of us,” McIlroy pointed out.

Form says no one has come from farther back than four shots to win in the final round of this major but here’s how they’re lined up behind the two co-leaders:

Cameron Young (71):  His downfall came at the par four 16th where he got out of position and four-putted for a double-bogey six.  Narrowly missed birdie at the 17th then skinnied his second into the 18th and lost a chance for birdie.  Shot one-under and looked better than the other, more experienced Cam.

Cameron Smith (73):  His nerves showed early when he three-putted the first hole the missed a 10-footer for birdie at the 18th — in all he totaled 35 putts on the day — his putter betrayed him.  Made an incredibly bad decision at the par four 16th where he tried a near-impossible shot for his second, standing in a bunker and trying to hit hit ball which was waist-high, outside the bunker.  That shot didn’t go far, found some light gorse, his third was short and he took three more to get in the hole — double-bogey. Only player among the top six to shoot over par for the round.

Scottie Scheffler (69):  Couldn’t buy a putt all day.  He missed birdie putt after birdie putt and can look back at this day and know the flat-stick really cost him.

Si Woo Kim (67):  Went out really early when there was basically no wind and took advantage of that.

Dustin Johnson (71):  DJ was three-under for the day through 12 holes and in pretty good shape but got sloppy and played the last six holes two-over par.  A birdie at 18 got him under par for the day but six back is a lot to make up given what’s in front of him.

It’s been eight years since Rory last won a major and he handled the pressure on day three with huge fan support.

To win on Sunday, McIlroy said:  “I need to be committed to my process — stay in my own little world.  Stick to my own little game plan.”