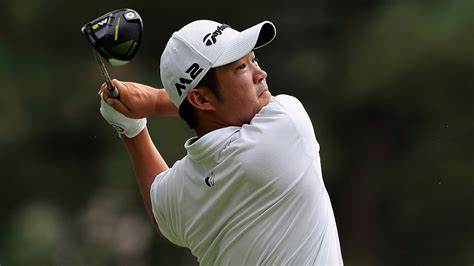 John Huh had seven birdies and an eagle on his scorecard Thursday.

John Huh hasn’t exactly torn it up this season on the PGA Tour but he picked the right day to shoot his career round — a nine-under par 61 that put him into the first round lead at the regular season-ending Wyndham Championship.

Huh made eight birdies on the day at Sedgefield Country Club.  Seven birdies came from 10 feet or closer and he drained a 49-footer for eagle at the 15th.

“It’s kind of strange because like earlier I mentioned, I wasn’t really feeling great with my game and (to) shoot my career low, it’s kind of weird,” Huh said. “Sort of mixed feelings, but I’ll take this any day.”

Huh needed the low round.  He is No. 120 in the FedEx Cup — with some wiggle room because of the dismissal from the FedEx list by the defectors to Saudi-funded LIV exhibition.

“I know what’s on the line, I know how important this tournament would be,” Huh said. “At the same time you’ve just got to go and play and I think I did that really well today.”

Huh was two clear of Sungjae Im, who had a pair of eagles on his scorecard en route to a 63.  Im is in great shape, he’s No. 15 on the FedEx points list and set for the post-season.

But there are plenty of players in the field desperately trying to finish in the top 125 and gain a spot in the playoffs.  Austin Smotherman sits at No. 135 and helped his cause with a 65 but he’s not in that bad a shape with the elimination of 10 players who went to the LIV series.

Will Zalatoris is one of the more recognizable players in the field but his 71 left him tied for 108th.  Rickie Fowler was there with Zalatoris (71) as was Shane Lowry.  Justin Rose struggled his way to 73.