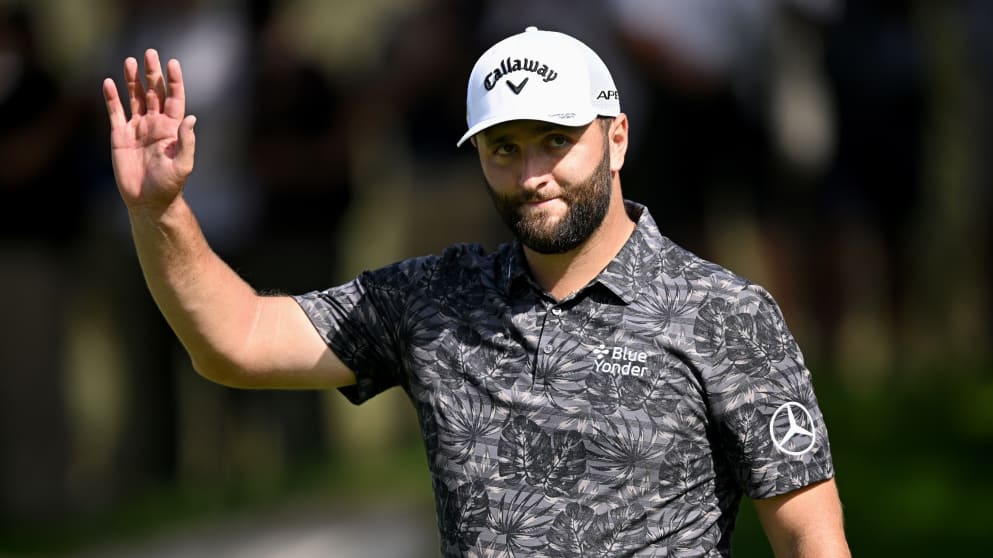 Jon Rahm wants his name next to Seve Ballesteros on the Open de Espana trophy.

Pay no attention to the trio at the top of the Open de Espana leaderboard — everyone’s out this week to see Jon Rahm.

Rahm, the native son of Spain, did not disappoint the large crowds who watched him open play on Thursday with seven-under par 64 at Club Campo Villa de Madrid.

Rahm was a shot behind tri-leaders Kiradech Aphibarnrat, Darius Van Driel and Ashun Wu, who all recorded eight-under par 63s, a shot better than Rahm, the world’s sixth-ranked player.

Rahm-bo is chasing history, trying to put his name next to the great Seve Ballesteros as a three-time winner of the DP World Tour event.  Seve won this event in 1981, 1985 and 1995, and Rahm would love to emulate that achievement.   “It would be incredible. He is obviously the reference in Spain. He made golf where it is in this country.  He changed golf worldwide but here especially. So any time you get your chance to put your name on a list that only Seve is on (in the DP World Tour era), it’s really incredible,” Rahm said after his round.

“I’ve been able to do it a couple of times with a few accomplishments but to be able to win this event three times would be incredible.  I don’t want to think about it too much but it would be a dream come true, it would be a true honor.”

Rahm began his first round with a birdie at the 10th before holing his 33-foot eagle putt on the 14th, drawing huge cheers from the local fans.  He closed his front nine with back-to-back birdies at the 17th and 18th before giving a shot back at the first, thanks to a wayward tee shot.

Rahm, the pre-tournament favorite, bounced back with birdies at the fourth and fifth before chipping in for another gain on the eighth to reach seven under par.

I’m glad I could follow up my last competitive round with another really good round and keep the good play going.  It’s important to start strong.”

Defending champion Rafa Cabrera Bello had a disappointing first round, finishing with a three-over par 74.

Jodi Ewart Shadoff has played in 245 LPGA Tour events, she’s still looking for her first win.  She took a step toward that goal Thursday at Saticoy Golf Club with a first-round 64.

Shadoff’s eight-under par effort put her on top of the leaderboard at the Mediheal championship, two shots better than Allison Lee and Ruixin Lin.

“I just felt really relaxed today,” Shadoff said. “Everything was just kind of flowing. I was just rolling it really well with the putter. Just helps when everything is just gelling together.”

Teenager Atthaya Thitikul, winner two weeks ago at the NW Arkansas championship, kept up her momentum with an opening 67.  She’s pushing toward the No. 1 ranking in the world at the age of 19.  “I do like the challenging things in golf,” Thitikul said. “When challenge come to you it’s like it’s another test. It’s another experience that (you’re) going to get. And then if you play in challenging course then you know how your game is.”

Danielle Kang, who played collegiately at nearby Pepperdine, continued her good play, joining Thitikul in the group at 67.