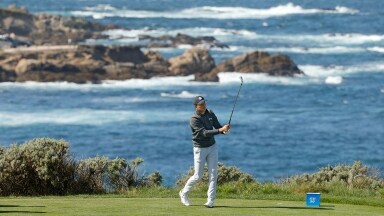 Jordan Spieth made a spectacular eagle at 16 on his way to the 54-hole lead.

Jordan Spieth Leads — Can He Close The Deal At AT&T

It was a much tougher day Saturday on the Pebble Beach Golf Links, as Jordan Spieth had predicted and he emerged from the wind-swept third round with the solo lead at the Pebble Beach Pro-No-Am.

Spieth was deadlocked at 13-under par with Daniel Berger standing on the 18th tee when Berger hit a horrible tee shot that sailed right on him, bounced, hit the cart path and settled out-of-bounds.  Berger would finish with a double-bogey, handing Spieth the 54-hole lead.

Spieth hit a great drive at the 18th and pulled three-metal from his bag but after a lengthy discussion, caddie Michael Greller talked him out of it and Spieth played conservative and closed with a par for a round of 71.  He’s in at 13-under par, two shots ahead of five players crowded at 11-under.

“There were some things I did really well today and some things I need to improve on for tomorrow,” Spieth said after his day’s work.  “At 16, that was a bonus, there was a little mud on the ball, I had a good number and hit a punch eight-iron.  It’s pretty cool to have two of those in one week at Pebble Beach — good memories.  I made great swings from 12 on in.  I liked how it felt.  I want to take that motion and tempo into tomorrow.”

Here’s how they’re lined up behind Spieth, who will be out to end his nearly four-year slump on Sunday.

Nate Lashley (68):  Lashley had a great round going, he was six-under par for his round through 16 holes but a bogey-bogey finish dropped him out of his share of the lead and into the group of five chasing Spieth.  Still, it was a nice performance by Lashley in the tough conditions.  On the 18th, he hooked his drive onto the rocks and played it but he was unable to salvage his par.

Tom Hoge (68): Hoge went nuts on the first nine holes, where there are birdies available.  He had four of them along with an eagle at the easy par five second, a hole where Spieth made bogey and basically lost two shots to the field.  But Hoge got caught up in the back nine breezes and came home in 38.

Russell Knox (69):  For a guy from Scotland, Russell Knox was bundled up more than anyone in the final groups.  He made the turn in three-under then peeled off nine straight pars on the inward nine.

Patrick Cantlay (72):  Cantlay’s putter let him down all day as he had perhaps more good birdie looks than anyone.  Highlight of his round was a spectacular second into number two and he holed a nine-footer for eagle three.  He birdied the 18th to join the club at 11-under.  The pre-tournament favorite is still in good position heading into the final round.

Daniel Berger (72):  “I’m not going to let one bad swing ruin my week,” Berger said after his closing double-bogey, a result of his out-of-bounds tee shot.  “I played really well and I like my chances tomorrow.  Jordan’s gonna have to play well — there’s a lot of guys right there.”

Jason Day (68):  Day knows his way around Pebble Beach and he’s finally healthy and it’s beginning to show in his performance.  He’ll need a good round on Sunday but regardless, he’s on his way back.

Brian Stuard (69):  Would be a surprise winner but so was Nick Taylor last year.

Mavrick McNealy (69):  Had an eagle at the second but was hit with a one-shot penalty at the par three fifth when his ball moved before he hit a short pitch shot.  Television review deemed that he caused the ball to move.

Paul Casey (71):  He won in the Middle East a few weeks ago and he’s continued to play well.