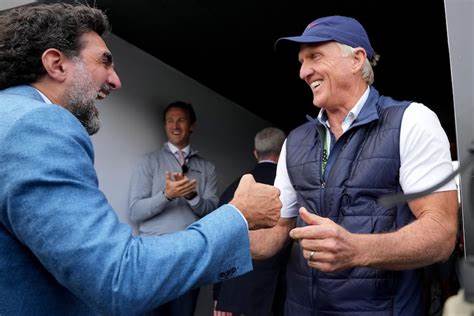 The "Lamest Commissioner" with Yasir Al-Rumayyan.

It’s looking like Judge Beth Labson is going to agree with the PGA Tour in the latest twist in the LIV vs. PGA Tour lawsuit.

You may or may not recall that one Yasir Al-Rumayyan, who calls the shots when it comes to the Saudi sovereign wealth fund, was seeking immunity from being deposed in the discovery process of the lawsuit.

Attorneys for the Tour claim that PIF and Al-Rumayyan “misstated their central role in running LIV and making decisions related to this lawsuit” and “strategically withheld” documents that proved their control of the startup league.

The claim also stated:  “The owners of LIV, Performance 54, and PIF, the Saudi investment fund, were involved in setting this up and using something called Project Wedge, before there was a LIV,” argued Elliot Peters, the lead attorney for the Tour, during a Dec. 16 hearing. “It’s critical that we get discovery from them about their activities, their plans, their expectations, their budget and so on.”

Both the PIF and Al-Rumayyan claimed the U.S. District Court doesn’t have jurisdiction over a foreign sovereign wealth fund, but the Tour countered late Monday with a supplemental motion:  “PIF and Al-Rumayyan should not be permitted to conduct business in the United States … only to hide behind a shell corporation to evade the jurisdiction of this court,” the motion, which was filed in the U.S. District Court of the Northern District of California, read.

Unfortunately for LIV, Judge Labson said:  “If LIV Golf is controlled by these entities, then LIV Golf is the entity that should be producing these documents. Their failure to do so may give you grounds for seeking a terminating sanction on some of the claims.”

And on it goes.

The USGA has selected famed Winged Foot to host the 2028 U.S. Open.

The major will be staged over Winged Foot’s west course where Bryson DeChambeau won in 2020, shooting six-under par.  He beat Matt Wolff by six shots.

Lydia Ko is heading to Saudi Arabia next month where she won the Saudi Ladies Invitational last year.

It is a Ladies European Tour event and is staged at Royal Greens, the same venue for the men’s Saudi International.  The event starts February 16.

Ko has yet to commit to the LPGA’s season opener — the Tournament of Champions — at Lake Nona.  Play begins there on January 19th.

Poetry In Motion: How About Swing Tips From The Great Bobby Jones?

Masters Mistake And The Tale Of Two Scott Stallings

Scottie Scheffler Can Go Back To No. 1 — If

What Does The 2023 Season Have In Store For The World Of Golf?

Rory McIlroy, Shane Lowry Won’t Be At Tournament Of Champions