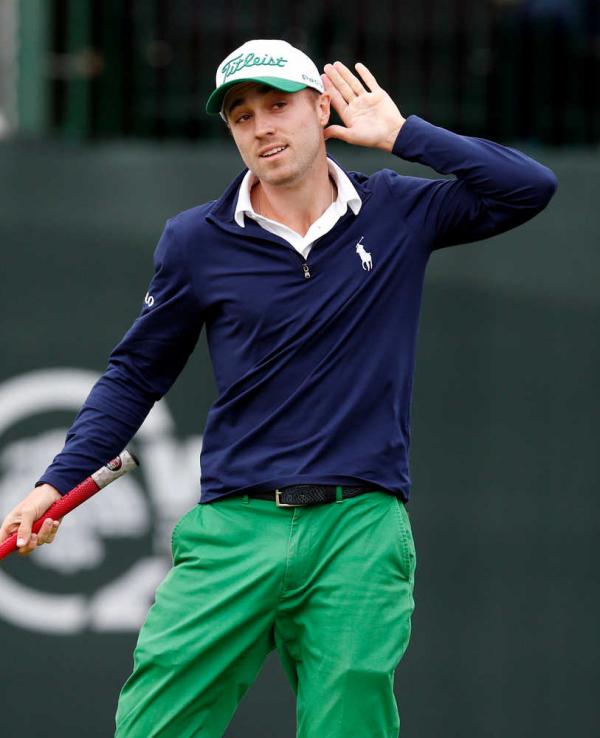 Justin Thomas heard some roars when he aced the 13th hole on Saturday.

It was moving day Saturday at the WGC-Mexico, and there were a lot of crazy moves going on at the Club de Golf Chapultepec.

Dustin Johnson got things going early when he smashed a spectacular 316-yard two-iron shot off the first tee then followed it with a 19-foot eagle putt that got him going early.  He would finish with a 66 that got him to 11-under and a shot behind the player who hit an even more spectacular shot.

Justin Thomas launched his tee shot on the par three 13th hole, playing 235 yards.  “It looked perfect so naturally I said ‘go in the hole,'” was how he described the moment when his shot hit the green, took one big bounce then found the bottom of the cup for a hole-in-one.  That ace gave him the lead and he would hold it the rest of the day.  Like Johnson, he shot 66 but was a shot better at 12-under and holds the 54-hole lead.

But Thomas, the winner of three events this season, will have plenty of big names chasing him in Sunday’s final round.

Phil Mickelson had the days most miraculous round.  Mickelson was plagued by wild drives and found himself in deep bushes, trees and other obstacles but somehow, buoyed by just 22 putts, he found a way to shoot a three-under par 68 that could have well been a 75.

Mickelson is at 10-under, just two back of Thomas along with Rory McIlroy.

“I didn’t hit any foul balls,” was how Spieth described his day. I’m very pleased to have a chance, no reason we can’t do it again tomorrow (Sunday).  Spieth will probably need another 63 if he hopes to catch Thomas or any of the other stars in front of him.