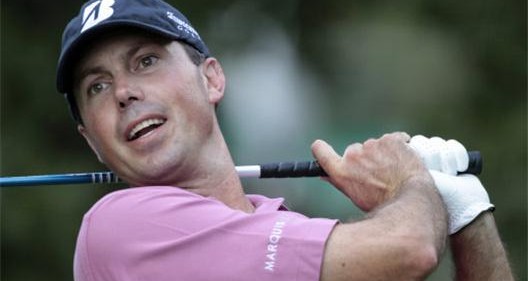 Matt Kuchar's bogey at 18 created a three-way tie at the top.

Matt Kuchar was on a roll, so was Emiliano Grillo.

Then the rain came late Saturday at Muirfield Village and by the time they were able to get back out, momentum had left the property.

Both Kuchar and Grillo faltered after Saturday’s restart and as a result, there is a three-way tie at the top of the Memorial.

Kuchar bogeyed his last hole while Grillo took a double-bogey at the 17th. Kuchar will go into Sunday’s final round tied at 14-under par with Will McGirt and Gary Woodland.

McGirt put the day’s low round in the books and finished early with a 64 to gain his share of the lead. He was long gone by the time the rain was over and the eight players left on the course went out to finish the third round.

Grillo is at 13-under along with Dustin Johnson, Adam Hadwin and  Jon Curran.

Jason Day should have been in that group as well but he made double-bogey at the 18th from just short of the green. His pitch shot failed to clear the false front and it rolled back well past where he hit his third. The world’s No. 1 will start his Sunday three back instead.

The eventual winner could come from as far back as the groups at nine or 10-under.

The only problem once again could be the weather, which could threaten by the afternoon.