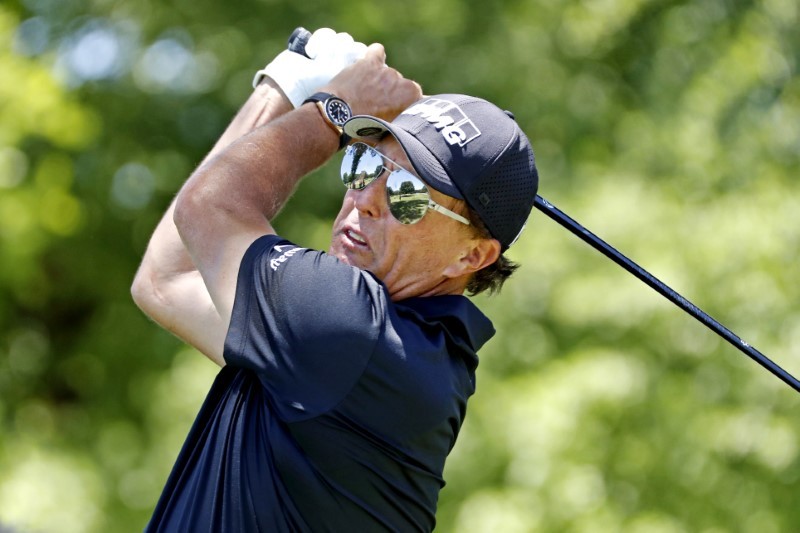 Lefty showed up sporting his mirror sunglasses at the Schwab Challenge.

Lefty At 50 — Can Mickelson Win Again As He Heads Over-The-Hill?

Who was the man behind the mirror sunglasses last week at Colonial?

Yes, Lefty cranked up the private jet and flew to Fort Worth for the 2020 season re-start at the Charles Schwab Challenge.  He only got in two rounds.  He shot 69-71, came up a full two shots short of what he needed to stick around for the weekend at Colonial.

Lefty hopped back on his private aircraft and flew home to celebrate his 50th birthday.

Yes, the man who never fails to entertain us in one way or another, turned 50 yesterday (June 16).

Typically Lefty’s birthday has come during the U.S. Open, the one major that has eluded him.  This go-round, there’s no U.S. Open.

Perhaps his kids will get him some gag gifts — like a compass to help him find fairways.

So with the future Hall-of-Famer getting long in the tooth, we wonder out loud:

When will Lefty win again on the PGA Tour?

It’s a question worth exploring.  His last win came at the 2019 AT&T Pro-Am at Pebble Beach.

This year (2020) hasn’t been real kind to Lefty.  After missed cuts at the American Express and The Farmers, he impressed with a third at Pebble Beach, a course he loves.  He followed that up with three straight missed cuts — The Genesis, Arnold Palmer Invitational and last week at Colonial.  Six events in 2020, five missed cuts.

It’s not exactly all that encouraging for a guy who’s now 50.

No Spectators Allowed At 3M Classic Outside Minneapolis:

Maybe it’s for the best but there will be no fans allowed at the TPC Twin Cities when the PGA Tour’s 3M Championship is staged July 23-26.

Minneapolis was the scene of riots, looting and mass demonstrations following the death of George Floyd.

McIlroy Made Driver Change At Colonial:

Rory McIlroy made a driver change last week prior to the Charles Schwab Challenge.  He was using a 10.5 degree TaylorMade SIM driver that was set up to 8.5 degrees.  He switched to  a 9-degree SIM Max driver, set up to the same 8.5-degree loft as his other one.  Shaft remained the same.