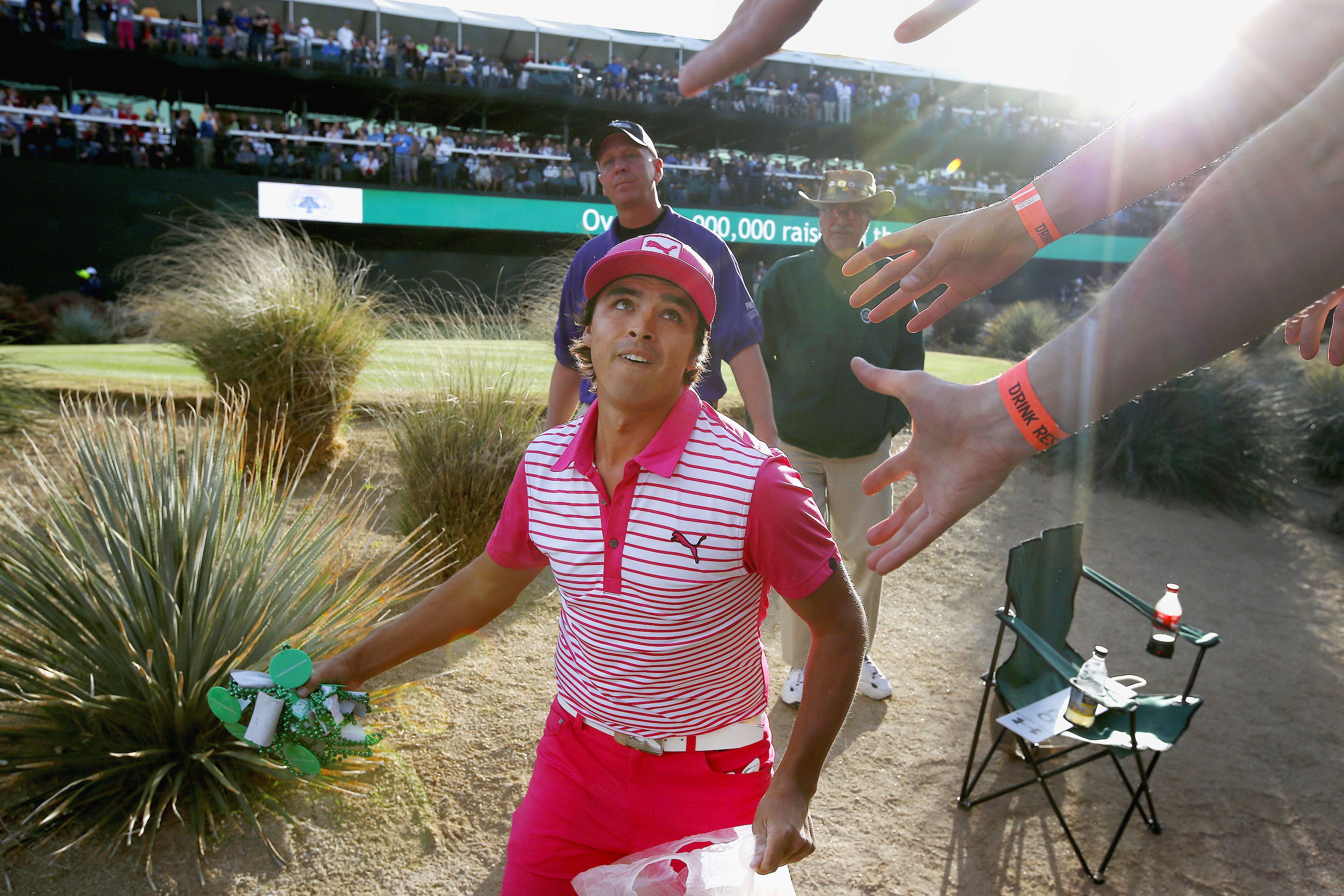 Rickie Fowler "feeds the animals" at the 16th hole of the Phoenix Open. -- AP Images

The PGA Tour calls it the Phoenix Open but this is the week everyone in the town marks on their calendar.

This is the week where it’s vogue to skip work on Friday, maybe even Thursday.

This is the week when golf becomes fun — and then some.

The 16th hole at the TPC Scottsdale is Party Central, the epicenter for the madness, the place where mayhem reigns and louder is better.

Tiger Woods put it on the map back in 1997 when he drew eyeballs like no one else in sports and all he did on that fateful Saturday was jar a nine-iron on the 162-yard hole. Insanity ensued. That was the start.

There is no “golf clap” at the 16th. Screaming and yelling are the order of the day. They’ll jam close to 20,000 on that single hole.

The starched collars at the PGA Tour headquarters won’t like this but it’s important to point out that the crowds there in the stadium setting at 16 may be the most well-lubricated on the tour. Yes, abundant alcohol. So much in fact that the tournament now has a “booze patrol” if you will, formed to escort those who get past the point of total rowdiness off the grounds. Good thing the PGA Tour isn’t in charge of British soccer matches.

When Woods made his ace back in ’97, there were stands, but not to the extent there are today. Arizona State students inhabit those bleachers so the event built in 155 skyboxes for the “adults.”

Things got creative over the years. The caddies started to “race” to the green. The PGA Tour banned that in 2014.

Players would often throw souvenirs to the fans, Phil Mickelson threw a football into the stands. No more of that.

Some of the players will toss hats from their sponsors into the stands. That’s okay.

Heaven forbid that people start having too much fun at a golf tournament.

The big draws this week are, of course, Rickie Fowler, Mickelson and Bubba Watson.

Mickelson has the Arizona State connection — he’s a Sun Devil.

Bubba loves to encourage the crowd to start yelling before he hits and to keep it up all the way through his swing. Constant noise doesn’t bother Bubba.

Rickie is Rickie. He still looks like a college kid even though he’s 27. He also likes to throw caps to “the animals.”

There are all sorts of shenanigans. There’s a lot of chanting — the crowds know where these players went to school and might taunt someone now and then — all’s fair at the 16th.

It is one heck of a party — with a little golf on the side.