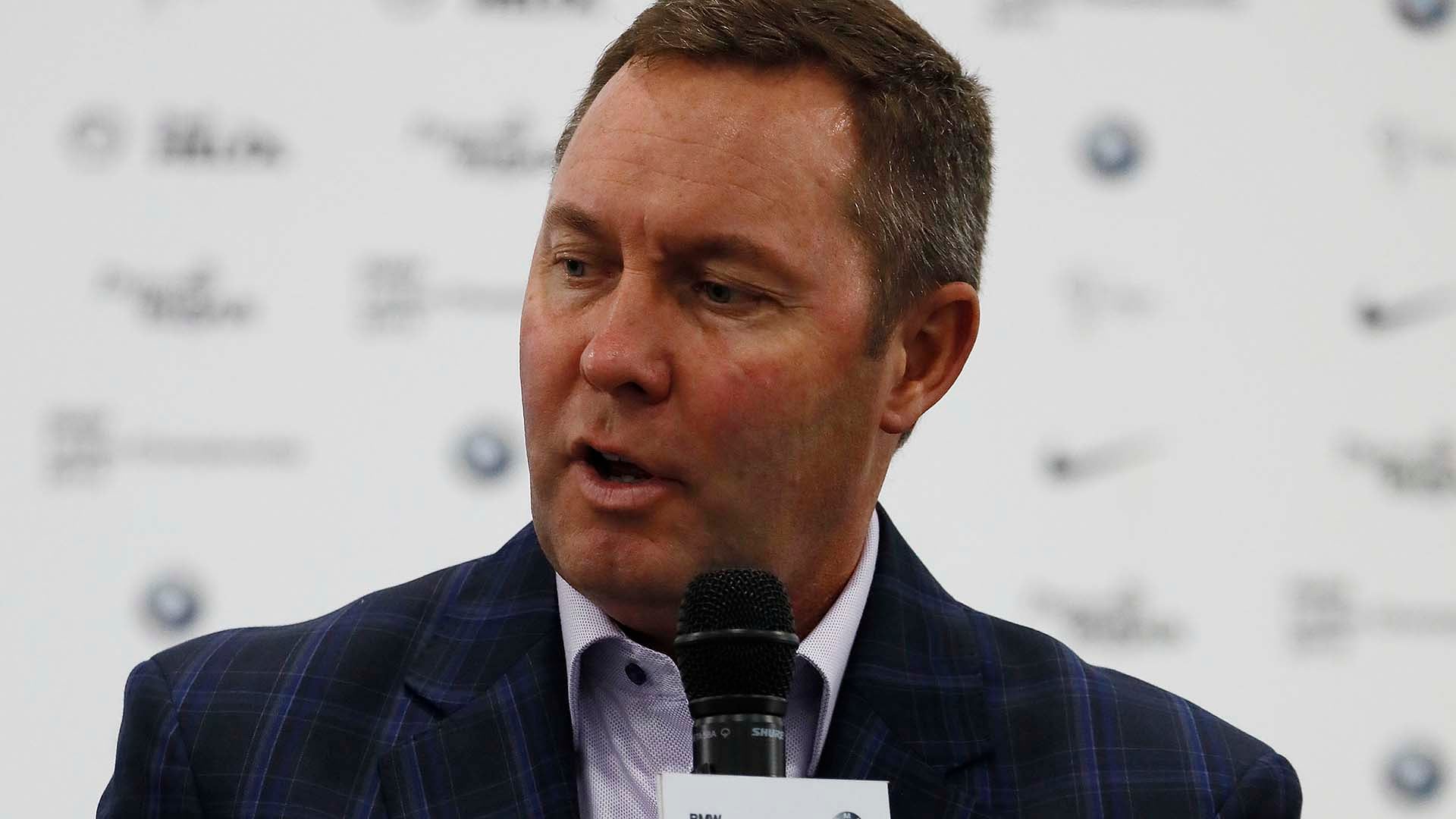 Michael Whan: The Perfect Match To Lead The USGA

Mike Davis announced he was stepping down from his post at CEO of the USGA around September 22 of last year.

In early January, Michael Whan then announced his time at LPGA Commissioner was coming to and end.

Was it possible that Whan was already thinking about the USGA position in the weeks and months after Davis made his announcement?

However it shook out, it was obvious that as soon as Whan announced he was stepping down, the speculation already started that he would end up with the CEO position at the United States Golf Association.

That came to fruition this week — Whan is the USGA’s new guy who will have to navigate the controversial Distance Report and mend some broken fences as far as relationships with some PGA Tour stars.

After all he accomplished for the LPGA, Whan should be more than up-to-the-task to push the USGA into better footing in the golf universe.

First thing Whan pointed out when he was announced as the successor to Davis, is that he is very skilled when it comes to forming strategic partnerships.  That’s a real plus as he prepares to run golf’s ruling body for the United States.

The USGA is seeking stronger alliances with the expanding and changing entities in the golf world — and that’s right in Whan’s wheelhouse.  With the money challenges that face a not-for-profit sports organization, Whan should do quite well.  As for the distance debate,  Whan’s background includes time at the golf division of Wilson Sporting Goods, TaylorMade then TaylorMade-Adidas after that acquisition.  With possible new rules on the horizon, the manufacturers and players are not all that excited.

Whan also has the reputations as an excellent communicator.  He’s extremely comfortable in front of microphones and cameras. There’s a realistic expectation that Whan will assume a more “out front” role than any USGA leader since Joe Dey, who ruled as executive director from 1934-68.

“I’m not shy,” Whan conceded. “Stage fright has never been a part of my life.”

As for the direction of the distance debate, Whan emphasized:  “The last thing I’m going to do is become the head of the USGA who is going to try to stick a company’s $100 million in R&D in some box and say no more innovation.  I really believe that innovation, the investment that the manufacturers make in the game of golf, is one of the things that makes our sport better than so many other sports. So we don’t do this without the voice and the help of the manufacturers in the process. That won’t be easy. But that’s one of the things that makes me excited about it. I do like the people we’re talking about doing this with. I’ve lived their life. I know what it’s like to have a bunch of money in inventory and R&D and trying to push the envelope. We’re not going to take the fun out of the game. We’re not going to take the innovation out of the game. We’re just going to make sure that the game is just as fun and innovative in 100 years as it is today. And finding that balance, I’ll be the first to admit, won’t be easy. But I’m excited about a group that is not backing away from something just because it’s not easy.”

Whan also went back to the “partnership” talk.  “I want the golf world to perceive the USGA as a partner,” he said. “In growing and protecting this game. And making it more inviting. I know sometimes we gotta make tough decisions. But I don’t just want to be the cop of the game. I want to be the person who is in this with you.”

Sounds like the right guy for the task, doesn’t he?

The LPGA Tour will have a new match-play tournament on its schedule this spring.

The inaugural Bank of Hope LPGA Match Play will be held May 26-30 at Shadow Creek Golf Course in Las Vegas.  The 64-player, $1.5 million event will expand the LPGA’s 2021 schedule to 35 events worth $77.95 million, which are both records for the tour.

Bank of Hope had been associated with the LPGA as title sponsor of the Founders Cup in 2017-19. The LPGA Match Play field will be divided into 16 groups of four players for three days of round-robin matches to decide the 16-player bracket. The final 16 players will compete in single-elimination matches.