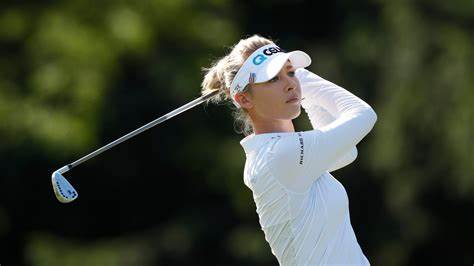 World No. 2 Nelly Korda heads the field at The Ascendant Championship.

Posted By: Tom Edringtonon: September 27, 2022In: In Other News...No Comments

The LPGA Tour leaves Arkansas and heads to Texas, just outside Dallas for the Ascendant Championship at The Colony.

This one’s had a number of names, best known for its affiliation with Volunteers Of America, the beneficiary of the tournament.

Nelly Korda, the world’s No. 2 is back in action and heads this week’s field for the 72-hole championship at the Old American Golf Club.  Korda is joined by Brooke Henderson, Lydia Ko, Lexi Thompson and last week’s winner, teenage sensation Atthaya Thitikul.

World No. 1 Jin Young Ko was the winner last year but Ko is still away from the LPGA Tour, taking time to rehab her ongoing wrist injury.

The LPGA Tour is beginning to wind down with only a half-dozen events left until the season-ending CME Group Tour Championship in Naples.

This is the next-to-last event in the U.S. before the Tour returns to Florida for the Nov. 10 Pelican Championship in Belleair.

The top 60 in the point standings will be eligible. A strong finish in each of the last six events will also give players a chance to further solidify, or to advance, in the season-long races for the Rolex Player of the Year, Money Title, Vare Trophy, and Louise Suggs Rolex Rookie of the Year.

We’ve said this before and it has played out — now way that Phil Mickelson (aka Defector-In-Chief) wants to be deposed by the slick lawyers that will represent the PGA Tour in the lawsuit filed by the lame LIV-circus/exhibition series.

Mickelson has dropped his name from the complaint — so have Matt Jones and Peter Uihlein (anybody miss seeing those guys on the PGA Tour?  Wait, they rarely, if ever, make it to a live broadcast.  And a fourth, the wrist-popping Bryson (The Whiner) DeChambeau, has pulled his name off the complain as well.