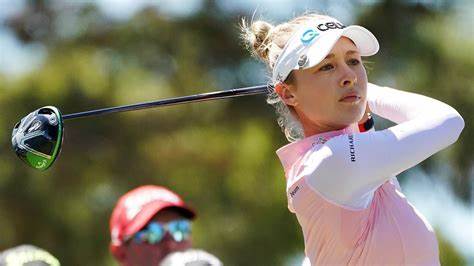 Nelly Korda has a shot at regaining the No. 1 ranking.

Posted By: Tom Edringtonon: September 16, 2022In: In Other News...No Comments

With defending champion Jin Young Ko out of action with a sore wrist, world No. 2 Nelly Korda was the high-profile player in the field at the Portland Classic, playing in the event for the first time.

Korda has a chance to get back to No. 1 with Ko on the sidelines.  Her first round had its twists and turns.  She had six birdies, an eagle, a double-bogey and two bogeys on her scorecard.

“It’s just the first day,” Korda said after signing that mixed card.  “Can’t win it, but you can definitely lose it. So I just tried to stay pretty confident in what I was working on with my coach, Jamie Mulligan, the past week.”

Those huge Ponderosa pines can lead to a big number as Korda discovered. “When you miss a fairway it’s hard to get through the trees,” she said. “Unfortunately, the couple of mistakes that I did have, I hit it out to the right into the trees and couldn’t really get a good score.”

Japan’s Ayako Uehara, who is ranked 415 in the world, has her first-ever lead in an LPGA Tour event after shooting 65.  Hannah Green was a shot back after carding 66.

If you listen to The Lamest Commissioner In All The Land (aka Greg Norman, aka The Great White Fish-Stick), he makes it sound like media companies are falling all over themselves to become broadcast partners with the Infidel-funded LIV exhibition series.

Well, the bad news for TLCIATL is that Apple TV flat out said no, deeming the situation as “too toxic.”

And Apple wasn’t the only one.  Amazon has also slammed the door on the LIV circus.

Of course any self-respecting network wants nothing to do with something that can literally deliver “thousands of viewers.”

Seems LIV has its twitter stooges everywhere and one that goes by “LIV Golf Insider” and claims to be 100 percent correct with all its LIV rumors, put out this pile of hogwash:

“My #LIVGolf source just confirmed with me John Rahm (sic) to LIV INV is indeed a GO,” the user wrote. “I’ve never been wrong about a LIV signing. Just look at my track record. PGA Tour is on the ropes.”

Well, you know it’s a really dumb source when they don’t know how to spell Rahm’s first name — it’s Jon, not “John.”

“I must inform you that you have started a losing streak because you and your source are wrong. I want to thank you for the lift in the PIP,”  Rahm responded.

Mickelson Dropping Out Of LIV vs. PGA Tour:

Defector-In-Chief Phil Mickelson is contemplating removing his name from the lawsuit filed against the PGA Tour by LIV players and LIV the entity.

No surprise there.  Mickelson would be there for the taking in depositions.  No way Lefty wants to swear to tell the truth.