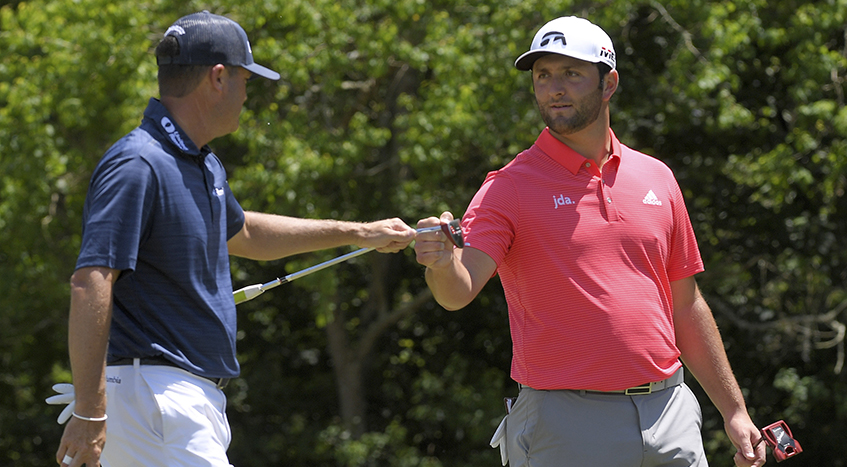 One-hundred and seventy players — 85 teams at the uber-crowded TPC Louisiana — will present a major pace-of-play challenge this week at the Zurich Classic in ‘Nawlins.

The event was cancelled last year in the COVID chaos and is back with the defending champs — Jon Rahm and Ryan Palmer looking for a repeat.

Format’s pretty simple in this one — rounds one and three are “Better Ball” of the two players with rounds two and four the dreaded “Alternate Shot”  — the Achilles Heel of many U.S. Ryder Cup teams.

The alternate shot was where Rahm and Palmer won it last year with their second round 65 — the tournament record for that format.  That score is unheard of in alternate shot formats.  They followed it up with a 69 in the final round.  Tour players are pretty good at best-ball competitions — two highly skilled players should go low and if they don’t — they should probably head home on Friday.

In 2019, Rahm and Palmer shot 64-65-64-69 for a winning 26-under par total, three better than Tommy Fleetwood and Sergio Garcia.  Three shots is a lot of shots in team play, pretty much like six shots in individual play.  Quick note:  Fleetwood and Garcia aren’t back this go-round.

Here’s a quick look at some recognizable pairings:

The team that really sticks out on the list is the Schauffele/Cantlay pairing.  You’ve got two players ranked inside the world’s top 10 in the Official World Golf Rankings:   You’ve got the “X-man” checking in at No. 5 and “Nervous Feet” Cantlay in at No. 10 — strongest pairing on paper.  Problem is everything is decided on the course and not in the rankings.

One team that might have looked good months ago but looks shaky at best coming in is the Collin Morikawa-Matt Wolff pairing.  Both are, to be honest, playing like crap — especially Wolff, who has had problems making cuts lately.  Morikawa played like a nervous rookie last Sunday at The Heritage and his putting stinks — he’s No. 180 in Strokes Gained Putting and hasn’t looked all that well since he went to that nasty claw, paintbrush or whatever you want to call that desperation grip on his putter.

Justin Rose is playing fine, Henrick Stenson is not.  Same for the Hatton-Willett British duo.  The Bubba Watson-Scottie Scheffler pairing bears some attention as does Hovland and Ventura.  The two Aussies — Leishman and Cam Smith have both been inhabiting the top of leaderboards with regularity.

Tony Finau and Cameron Champ could win if they had someone else putting for them.  Burns and Horschel sounds like a good law firm.

But once again — it will all boil down to which duo can thrive in alternate shot.

With time enough to have virtually everyone vaccinated, the PGA Tour will end its on-site COVID testing in July.

A memo was sent to players this week outlining the adjusted protocols.

Players and caddies who have been fully vaccinated will be exempt from testing and while the memo points out “the Tour does not plan to mandate vaccination,” the Tour is “encouraging it.”

Under the adjusted policy, anyone who has been fully vaccinated and comes in contact with someone who has COVID-19 won’t be forced to quarantine unless they have symptoms associated with the coronavirus.

PGA Tour Looking For Its Own Version Of “The Kardashians?”:

Is this a knee-jerk response to that still-lingering somewhere Premier Golf League?

Seems the folks at Golfweek have been doing some super-snooping and are reporting that the PGA Tour will soon come up with something called the “Player Impact Program.”  Said program will seek to identify the 10 biggest “needle-movers” in the sport and fill their already fat pockets through a $40 million bonus pool.

Somewhere Tiger Woods is trying to get well in a hurry.

Said “needle-movers” are the guys who bring the most added value through fan and sponsor engagement.  To which Rickie Fowler might say:  “Hey, have you seen all my commercials?”

On course performance will be only a small part of this equation.  There will be an “Impact Score” that will use a half-dozen metrics — google searches, Nielsen Brand exposure, the player’s appeal rating and another index called “MVP” based on engagement on social and digital channels and another metric — Meltwater Mentions — meaning coverage a player generates across media platforms — is Harry Higgs getting excited?  You bet.

To no surprise if you took all those metrics into account in 2019, you know who (whisper – Tiger Woods) is the top-rated cat followed by Rory McIlroy, Brooks Koepka, Phil Mickelson and yes, commercial-king Rickie Fowler.  Behind them were Jordan Spieth, Dustin Johnson, Justin Thomas, Justin Rose and Adam Scott.

This program allegedly went into place on January 1 of this year.

Nothing yet from PGA Tour Commish Jay Monahan (aka The Sheriff of Nottingham).