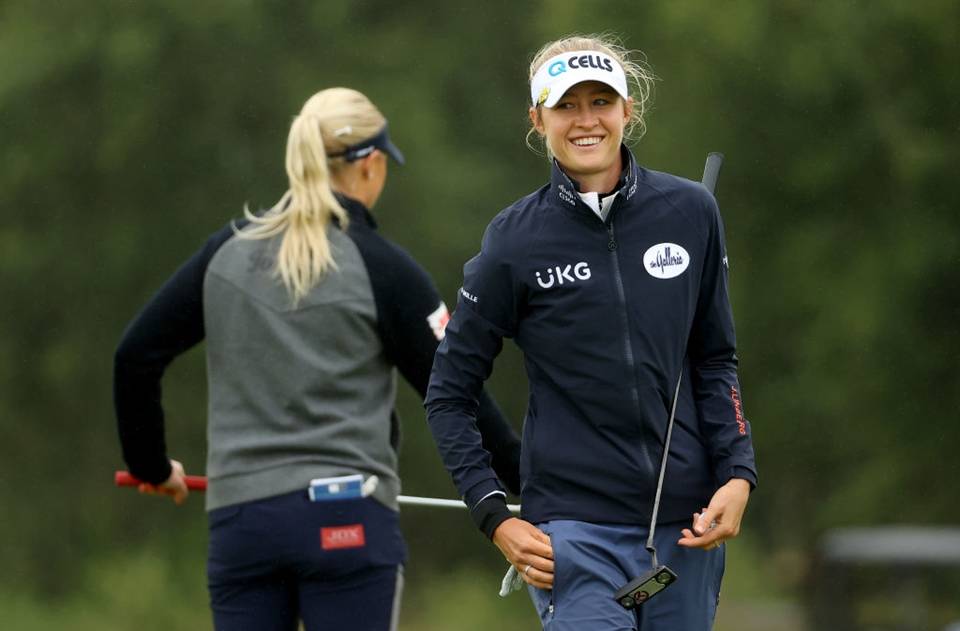 Nelly Korda had eight birdies on her card, incredible at Carnoustie!

Off And Running — Nelly Korda Starts Fast At Women’s Open

There was no nasty in Carnoustie Thursday, perhaps the old links were showing some respect for the ladies and it was Nelly Korda putting eight birdies on her card to start her quest to win the Women’s Open.

The world’s No. 1 and Golden Girl of the Olympics went out early when the weather was a bit more Scottish than it was later in the day.  It was chilly with a drizzly rain making things interesting.  With huge expectations greeting her in this final major of the season, Korda looked every bit the world’s best.  Had it not been for three bogeys, her five-under par 67 would have been even lower.

It was a tale of two sides of the draw, as it often is in Scotland.  Nelly and co-leader Madelene Sagstrom were the only two players to shoot in the 60s in the morning.  In the afternoon, Sei Young Kim joined them to make it three at the top when the day was done.  It was a scoring-fest in the afternoon — by day’s end, a total of 41 players were under par on a course considered one of the hardest in Scotland when the wind blows.  And there was the caveat.  There was little to no wind for most of the day, even less in the afternoon and the chilly air gave way to more mild temperatures.

Korda came in with high expectations.  “You strive to be in this position,” she acknowledged.  “So it feels good but you kind of know that.  You have a target on your back — I just try to take the positives and see how it goes.”  It went well for Korda, who knew she left some shots out on the course.  One of her bogeys came at the short par five 12th, playing less than 500 yards.  Her second sailed right of the green into some thick rough and she’d go on to miss a seven-footer for par.  But she didn’t have many hiccups on the day.

After a bogey at the long, 235-yard 16th, she finished birdie-birdie.

Sagstrom was six-under for the day coming to the final hole but took bogey and fell back into a tie with Korda.

With no wind, links courses are vulnerable to low scores and that’s what happened on day one.  Korda pointed that out.  “It wasn’t windy today, so you could take advantage of a little bit of the softer greens from the rain kind of and, yeah, the wind not being so strong.”

The tame conditions brought some interesting contenders behind Korda, Sagstrom and Kim.

U.S. Open champion Yuka Saso was in a four-under par along with 2018 Women’s Open champion Georgia Hall of England.  Former Stanford golfer Andrea Lee was in that group along with a big surprise name — amateur Louise Duncan from Scotland.

Lizette Salas, who went head-to-head with Korda on the final day of the Women’s PGA Championship, turned in a 68 as did fellow American Lexi Thompson.

By the end of this generous scoring day at Carnoustie, a total of 41 players had broken par.

It wasn’t what you’d expect from the infamous course that has broken so many hearts over the years.

But there’s a long way to go and the weather in Scotland can change at a moment’s notice.

Friday Morning Update:  It was another incredibly calm day at Carnoustie — is this really Scotland?  American Mina Harigae was the early clubhouse leader at seven-under (70-67) along with 2018 Open winner Georgia Hall (68-69).  Sei Young Kim (67-71) and Lizette Salas (69-69) were tied at six-under.  Lexi Thompson had it to seven-under through 13 holes but bogeyed 14 and 16. Lexi posted 70 and was in at five-under par.  Nelly Korda was rock-solid with pars over her first six holes, hitting every green but failed to come up with a birdie.  Behind Korda, first-round co-leader Madelene Sagstrom birdied three and four to join the leaders at seven-under par.  After two more pars, Nelly faltered with a bogey at the ninth, made the turn one-over, four-under for the tournament and three back of the leaders.  Sagstrom failed to birdie the reachable par five sixth then bogeyed seven and eight to fall back to five-under.  Nelly’s frustrations were day-long.  She birdied 17 and left her birdie bid at 18 short and in the jaws.  She finished with 73 and goes into the weekend at four-under, three back of the leaders.