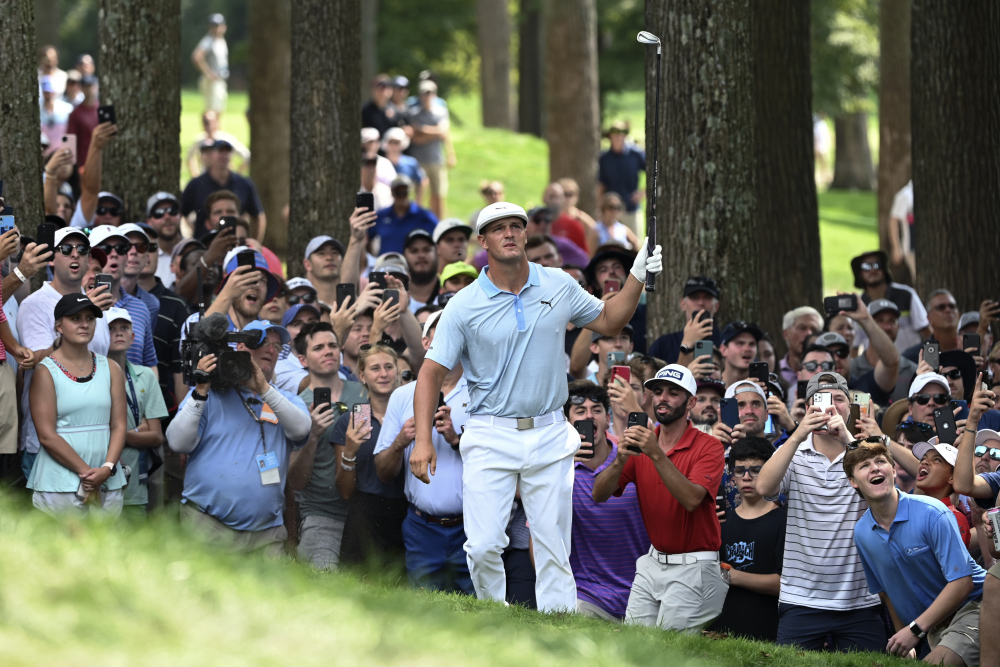 After he walked off the 18th green, heading up the hill, DeChambeau had an ugly exchange with a spectator.

It was bad enough what we could see at Caves Valley on Sunday but more than that, the worst for Bryson DeChambeau came not after Patrick Cantlay drove a proverbial stake through his heart on the sixth playoff hole, no, it came as the head-hanging DeChambeau headed up the hill toward the locker room.

He recorded his shocking observation and it was disturbing in so many ways.

Here’s how Van Valkenburg described it:

“After losing a six-hole playoff, Bryson DeChambeau was on his way up the hill and presumably to a cold shower.  A patron waited until DeChambeau had walked by, but was not out of earshot, then sneered from over the rope line, “Great job, Brooksie!” DeChambeau spun around in a rage and began briefly walking in his direction.  “You know what? Get the f–k out!” DeChambeau yelled. He had rage in his eyes.

“Thankfully, DeChambeau paused, angrily motioning for a police officer to handle the heckler, then continued his march up the hill. The entire exchange took less than 10 seconds. The PGA Tour declined comment when asked about the incident by ESPN.  But we’ve been building to something like this all summer. And I don’t know what the endgame is.”

The “endgame” as referred to by Van Valkenburg isn’t getting very pretty.  All you hear these days are louder, younger blowhards screaming “GET IN THE HOLE” at the top of their lung capacity on virtually every shot, all afternoon, especially for the tournament leaders.

For the past few years, the PGA Tour wanted to bring its product to the masses.  It wanted a younger demographic and it’s getting that.  It’s getting the testy bring-your-phone, drink-too many-beers-and make-yourself-part-of-the-story demographic.  Works perfectly for the WWE, not so much for the PGA Tour.

Remember when the Tour’s brand slogan was:  “These guys are good!”

Well, now it may as well be:  “See which of you can drink the most, holler loudest and make yourself part of the scenery.  Oh yes, and don’t forget to run full speed to get to your next viewing spot, don’t worry about trampling the unsuspecting.”

Bryson has insisted that the “Brooksie” chants don’t bother him.  That obviously wasn’t the case with that person who had the balls and bad judgement to throw that ill-timed insult at DeChambeau, who hadn’t yet cooled off from the heat of battle.  No, these are not “patrons” as Van Valkenburg referred to the Bryson offender.  No, these are well-lubricated power drinkers showing up on site to scream their lungs out.

Thank goodness for Augusta National, where cell phones remain forbidden to this day AND — no running — no one screaming “Get In The Hole” — no shouts of “Baba Louie.”

The Tour encourages them and you see people holding those phones up like badges of courage every time a play hits an offline shot and visits that No Man’s Land outside the gallery ropes.

Now add a guy like DeChambeau, who might claim to have thick skin, but really doesn’t.  Truth be known, Bryson can’t get out of his own way.  His mouth is a constant landing spot for his size 11 Pumas.

The talking heads kept telling us all week that this crowd was quite nice to Bryson.  No “Brooksie” cat calls but what do you expect when a guy is threatening the 59 barrier?  But when it got down to it and Bryson suddenly hit that wild drive that found the creek at 18 in the playoff, there were resounding cheers.

So it’s on to East Lake where perhaps it’s a tougher ticket with more spectators coming from name sponsor connections.  Hopefully the stupidity of the on-site masses will decrease (wishful thinking, right?).

But when it gets down to why this is happening in a sport where the PGA Tour has done it’s best to get rid of the “golf applause,” the Tour can look in the mirror and see the culprit.