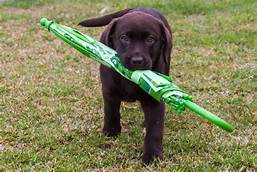 Posted By: Tom Edringtonon: August 26, 2019In: In The Doghouse2 Comments

The PGA Tour will always spout that the safety of the spectators is paramount.

If that’s the case, then why in heaven’s name did they have those 3:30 p.m. starting times on Saturday at the Tour Championship, knowing full well that the late afternoon skies over Atlanta had an 85 percent chance of getting very, very angry?

Fact is, the tour put the television broadcast first, hoping to ease the end of the round into the beginning of prime time.

Six spectators paid the price for the tour’s poor judgement.

The tour even has its own professional meteorologists huddled at their stations at all the events, monitoring weather radar and all the nifty forecast technology that’s available to them.  One thing they didn’t use was common sense.

So once again we put the  Sheriff Of Nottingham  (aka tour commish Jay Monahan) and his  Sinister Band Of Henchmen  (yes you Mark Russell) into the Dog House.

They totally deserve it, in fact, they’re not allowed IN the actual Dog House, they’ll have to stand out in the rain.