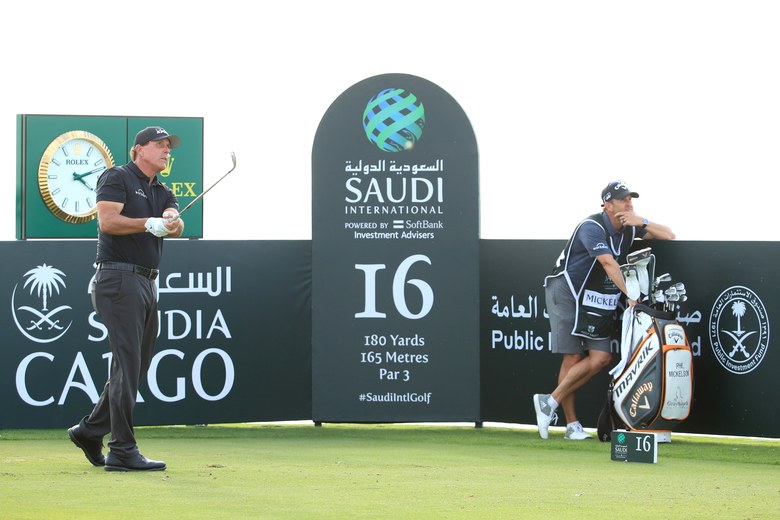 Phil Mickelson snubbed Phoenix for an appearance fee from the Saudis.

Phil Mickelson has been a huge crowd favorite at the Phoenix Open for what seems like forever.

Phil snubbed the massive crowds at the Phoenix Open for a fat appearance fee to show up at the controversial Saudi Invitational.

To make matters even more eye-popping, Mickelson just happened to be paired with the organizers of the proposed Premier Golf League in the pro-am on Wednesday.

Mickelson played in that pro-am with three important figures in the proposed competition for the PGA Tour.

Our favorite newspaper in Scotland, “The Scotsman” gave the details:

Mickelson spent the day with  one Majed Al-Sorour, CEO of the Saudi Golf Federation; sports consultant Colin Neville, who works for The Raine Group, a New York-based investment and advisory firm; and financier Andrew Gardiner, a director at Barclays Capital. Also accompanying the group was a man whom The Scotsman identified only as “Richard.”

Afterward the round,  Mickelson said he was “impressed” with the proposal, according to The Scotsman’s report. “It was fascinating to talk with them and ask some questions and see what their plans are. Where they started, how they started, why and just got their background, which was very interesting.  I haven’t had the chance to put it all together and think about what I want to say about it publicly, but I do think it was an informative day for me to have the chance to spend time with them.”

Per the Scottish newspaper Mickelson said:  “I asked a lot of questions today and there are some very interesting ideas and it seems very well put together. I think a huge aspect of it is about the fans. Before I formulate an opinion, I’ll look at whether or not this is a good thing for fans, is this a good thing for sponsors, and is it going to be good for television? How does it affect all those involved?”

Not sure what to make of Mickelson’s homework.

What we do know is that the PGA Tour has been quite good about looking the other way when it comes to Mickelson shenanigans such as his relationship with now jailed felon Billy Walters and the insider-trading caper that involved Dean Foods stock.

The tour has also turned a blind-eye to Mickelson’s known penchant for gambling.

In other words, the PGA Tour has been really, really good at never disciplining Mickelson.

But earlier this week, PGA Tour Commish Jay Monahan put out an ultimatum to tour members if the upstart league were to become reality, basically making a “them or us” threat.

In the meantime, after an opening 66 on Thursday, Mickelson shot a ho-hum 70 on Friday that left him at four-under and a full six shots behind early clubhouse leader Victor Perez (10-under).