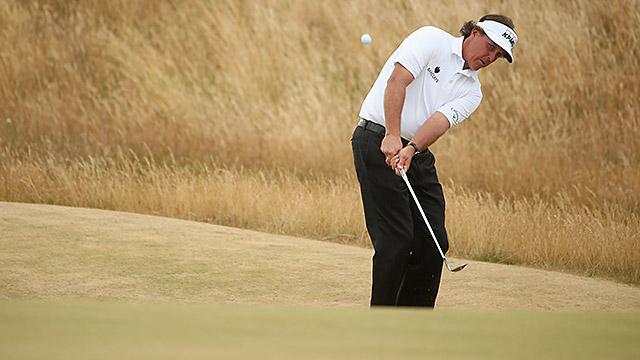 Phil Mickelson's game around the greens is still quite extraordinary.

Phil Mickelson Gives Us His Keys To Better Chip Shots

Posted By: Tom Edringtonon: May 08, 2020In: The Lesson TeeNo Comments

Phil Mickelson is one of golf’s all-time greats when it comes to the short game.

Today, we’ve brought Phil in to give everyone this three simple keys to sharpen your short game, especially those chip shots from around the greens.

Problem for most amateurs is they don’t hit enough greens in regulation on a consistent basis.  But that doesn’t mean you can’ score well.  It’s been preached time and time again that if you want to reduce your scores the fastest — work on your short game.  You’ll often see players standing on the range hitting drivers when it fact, you may only use that club 14 times a round, if that many.

How many greens do you actually hit during a round?  If it’s less than 10-12, then you better have a pretty sharp short game if you want to break 80 on a consistent basis.  Same goes if you’re looking to break 90 consistently, even break 100.  It’s all in the short game.

No doubt Mickelson has his PhD in the short game.  In today’s lesson, Phil uses his 60-degree wedge for his demonstration but don’t feel like you have to as well.  When you practice, try using different clubs, gap wedge, pitching wedge, nine-iron, eight-iron, even seven-irons on really long pitch-and-run shots.  If you’re lucky enough to take a trip to play golf in Scotland, those will come in quite handy.

Here’s Phil himself to show you how it’s done:

So here’s a quick review of what Phil just talked about:

It’s important to keep the leading edge of the club down.

First — keep your weight forward on all chip shots.

Second — your hands have to be ahead of the club-face.

“It’s the most easy short short swing in golf — but nobody does it right,” Mickelson emphasized.

So take it from Phil, then take it to the practice green.