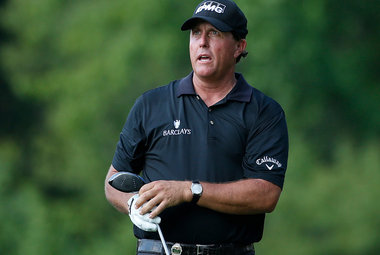 Phil Mickelson was whining about the setup of the course at East Lake.

Phil Mickelson Has A Little Whine Before Leaving East Lake

He couldn’t find many fairways.  He shot one-over par and tied for 22nd out of 29 players, just what you need to get ready for this week’s Ryder Cup.

On his way out, Phil found something to whine about.

He was miffed at how the PGA Tour had set up the golf course, scolding the powers-to-be for having that dreadful rough, citing that there wouldn’t be such a nuisance this week at Hazeltine.

Phil was also whining about the Sunday night announcement of Ryan Moore as the 12th and final member of the team.

“It might have been a mistake to wait this long for the final pick,” said Mickelson, a member of the infamous “Task Force” that was tasked with trying to come up with some clever way to return The Cup to the United States. “It’s kind of hard to get all the game plans and so forth in sync when the team is not quite finished.”

How about this for a game plan:   HIT SOME FAIRWAY PHYLLIS!!!!

And while you’re at it, tell those guys to make some putts this week when they matter.

That’s how the U.S. can win the Ryder Cup.

And it’s not the PGA Tour’s job to go easy on those spoiled babies.