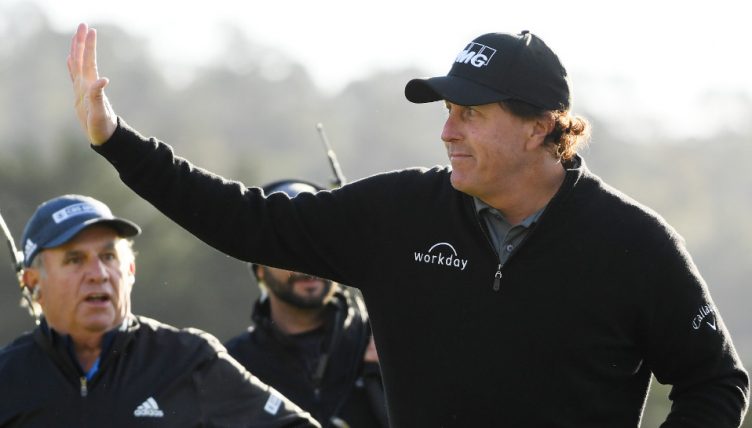 It took him an extra day but Phil Mickelson blew Paul Casey away with a dazzling 65.

Phil Mickelson’s Longer, Healthier — Is He Tougher Than Tiger?

Which brings the conversation to Lefty, who looks like a new man out there, in fact, he’s looked pretty darn good since he took that nine million off Tiger Woods last November.

Guys aren’t supposed to get longer off the tee at age 48, even more so for a guy who battles psoriatic arthritis.  Yeah, this Mickelson character is amazing.  Sounds like he’s borrowed a page from the Tom Brady lifestyle book.

Sure, Mickelson owns a bunch of those Five Guys hamburger franchises.  But it’s a pretty good bet he doesn’t eat what those stores cook up.  Mickelson has changed his eating habits.  Lefty is using a nutritionist’s help to tailor his diet for performance, reducing sugars and processed foods. He’s also using biomechanical studies to help turn weaknesses in his body to strengths, and he’s using stretching routines with his trainer to help create more speed in his swing.

Mickelson says he’s gained five to six miles per hour in his driver swing speed.  He sure as heck was blowing it past Casey over the final 18 at Pebble.  As Mickelson applied the pressure with three front nine birdies, you could see Casey begin to crumble.  Casey swing instructor, Peter Kostis, who also happens to be the guy in the fairway for CBS, pointed out that Casey’s swing kept getting shorter and shorter as the round progressed.  Perhaps due to pressure from Mickelson.

Lefty’s been working and it showed.  He hit the gym in the offseason to work on building up his strength and explosiveness. He went into scientific detail with a biomechanics study.  They looked closely at the kinematic sequence of his swing to identify strengths and weaknesses. He spent hours working on his putting and iron play.

Add in that nutritionist and suddenly Phil had a new regimen. Sugar is out of the equation.  Lefty was known to rarely said no to any dish or a second helping in the past.

“There are a lot of things that you can do to help your body heal, recover, and get strengthened,” Mickelson said.

Which brings us back to this really cool Phil vs. Tiger competition.  With Mickelson now in the 2019 winner’s circle, the eyeballs are now fixed on Woods in a sort of — Hey Tiger, Lefty’s a winner, what you got?

There will be a lot of eyeballs on Woods and Lefty at Riviera.  You figure Phil’s got to be a bit gassed after the long, slogging rounds at Pebble.  Woods has been off for a few weeks, no telling what he’s got.  Add the fact that Woods hasn’t exactly torn things up at Riviera.

With this new compressed season, the majors will be here before you know it.

Which brings us back to Lefty and Pebble Beach.

You wonder what Lefty might give for a final round 65 at Pebble come June?

You wonder how Tiger’s going to look heading for Augusta.

Every since that crazy Vegas afternoon in November — it’s been more of Lefty and less of Tiger.

And don’t think for a moment that Tiger hasn’t noticed that.

Lefty’s a perfect example of better living through science — better golf too.

And don’t think for a moment that Tiger hasn’t noticed that as well.