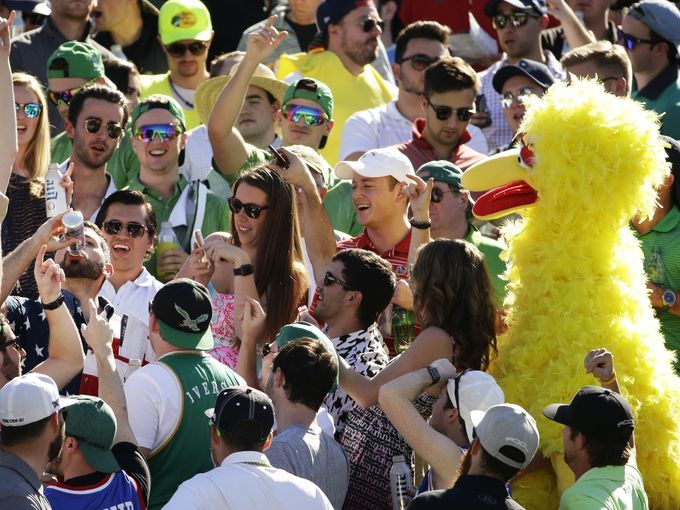 It's no secret that massive amounts of beer are consumed at the Phoenix Open.

PGA Tour players complaining about rowdiness at the infamous 16th hole at the Phoenix Open?

Yeah, Rickie Fowler was one of them earlier last week.

But there’s no putting The Genie back in The Bottle at the TPC Scottsdale.

The Phoenix Open has etched itself into sports event history as one of the most-attended events in the country.

This year’s tournament attendance pushed near the 700,000 mark for the week.

The epicenter of the party is the stadium setting of the par three 16th where they can jam north of 20,000 into a small piece of real estate.

Make that 20,000, most of them downing multiple adult beverages, many over the course of six or seven hours.

So let’s do some quick “beer match.”

Let’s go totally conservative and assign three beers per person at 16.  That’s a piddling number, many are in the under-30 “power drinker” demographic where three beers constitutes a simple “warm up.”

Not sure of the actual number but let’s say for math purposes that the cost of a beer is seven dollars,  not unreasonable for today’s major sporting events.  Twenty-thousand spectators at three beers each is 60,000 beers per day.  Multiply that by four, that’s Thursday through Sunday, not counting pro-am day on Wednesday and you have 240,000 beers consumed.  Times seven dollars and that’s $1,680,000 in beer sales just on that hole.

Doesn’t even count the Coors Light hospitality tent nearby where they have entertainment after the final putt drops each day.

Yes, this even is the Party Of All Parties.

But that’s what the PGA Tour has wrought.

Lots of noise, no problem, lots of drinking?  Well, there is beer and plenty of it.

So if the players don’t like it, they can stay home, there’s a tournament every week.

In Scottsdale, The Genie is out of The Bottle and there’s no going back on this one.