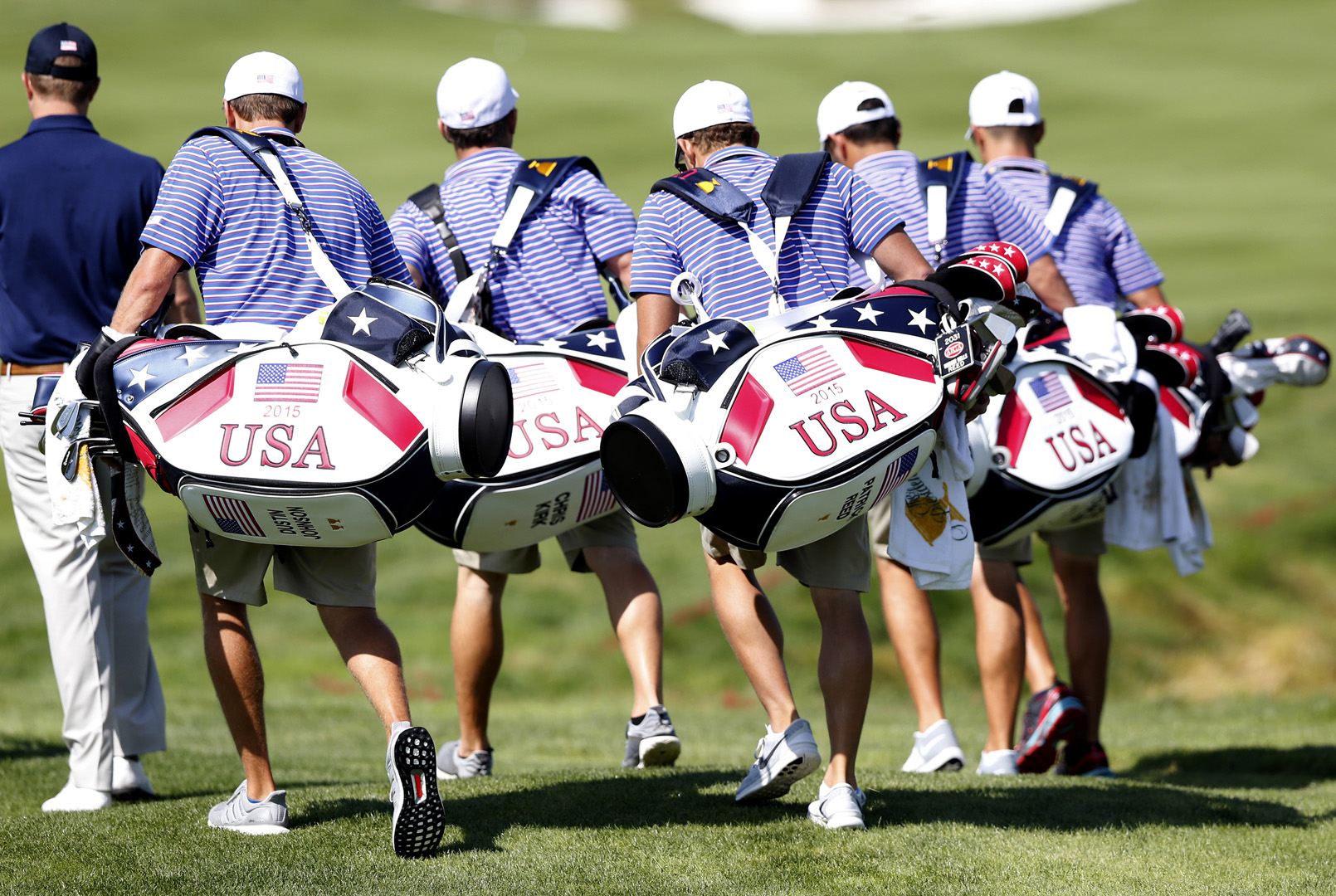 The U.S. team caddies are hoping for another American romp. --AP Images.

Here’s your golf question of the month:

The Presidents Cup will begin Wednesday in South Korea, does anyone in the United States really care?

The answer simply depends on who you are and where you are.

The telecast of the competition begins at 10 p.m. Wednesday, Eastern Daylight Time and carries through to 3 a.m. Yes, it’s a small world but South Korea is on the other side of the International Dateline for goodness sakes.

This one is perfect for insomniacs or golf fanatics who work the night shift.

You also have to take into consideration that this set of matches that pits the best U.S. players against the best International players hasn’t been much of a contest during its lifetime. Put simply, the Americans have dominated.

This week’s version of the series has a lot of interest in South Korea. There’s not exactly a lot happening over there unless you like to listen to threats from the fat little dictator to the north huffing and puffing about starting a nuclear war.

Yes, that’s enough to make anyone nervous and hopefully our lads will be safe from any inpending northern invasion while they are playing at the Jack Nicklaus Golf Club, South Korea, there on the outskirts of Incheon.

Can you imagine Kim Jong-un invading and taking the American golfers hostage?

Hopefully that’s something for a movie plot and the main battle will be Spieth vs. Jason Day in singles or something along those lines.

Those are the two names that create any interest at all in these matches.

There are plenty of questions going into Wednesday night’s start.

How tired are Spieth and Day? These guys have been at it hard and they have to be feeling it by now. There is always the resilience of youth and that weighs in their favor.

Hopefully Day’s presence can inspire some decent play out of the rest of the International lineup that is for the most part, uninspiring.

On the International side, there’s the sub-plot for Sang Moon Bae, who will shortly be entering the South Korean military. Hopefully he doesn’t have to lock up his clubs. Maybe his job will be to play golf with the generals.

Another sub-plot is former world’s No. 1 Adam Scott, who keeps sinking in the world rankings. He’s less than 90 days from that broomstick putter of his going bye-bye. Can he and will he compete this week with a short putter?

Then there’s the “old guy” on the U.S. team — Phil Mickelson. Lefty did his best to fade into oblivion this season. His best effort of the year was getting blown away by Spieth at the Masters. Mickelson finished tied for second and that’s the best he could do with this season. He did not make it to the Tour Championship.

He was a captain’s pick by Jay Haas and that seemed a disservice to J.B. Holmes until Jim Furyk’s contused wrist punched J.B.’s ticket to South Korea.

Yes, the U.S. is favored and should be. After all, they are a solid No. 2 in the world behind the Europeans. Perhaps the Internationals are tired of getting walked on and will rise up and make a contest of it.

At the least, it’s a great thing for those of you out there who cannot sleep at night.