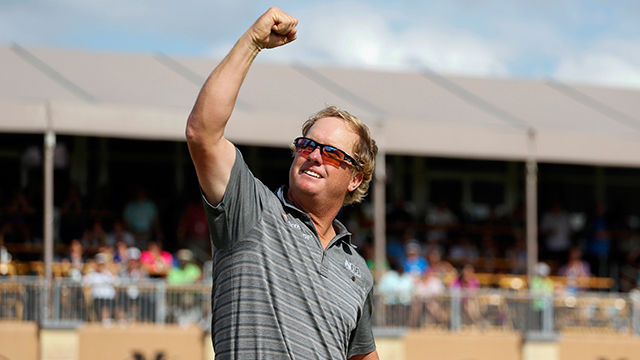 Day two was a miserable one for the International squad.  The U.S. put on a dominant performance, won four of the five matches and halved the other.  The lead is 8-2 and here’s how things went on Friday at Liberty National:

It looked like a mismatch on paper but Spieth and Reed had to rally in this one and they did.  Spieth lipped out for birdie at the 18th to win the match.  This was the only 1/2 point the International team came up with.

“We had a great time out there,” said Thomas after the win. “Just a lot of fun playing with this guy (Rickie Fowler).”  These guys are a great team, they’re 2-0.

This is probably a match the Internationals counted on winning but they didn’t.  Mickelson holed a 15-footer on the 18th to win the match for the U.S.  He and Kisner promptly tried to do the “Three Amigos” dance.  “I can’t do the Three Amigos but I can putt,”  Mickelson quipped.  Sad performance for J-Day who looks more like J-Dud.  He had plenty of chances to hole winning putts but didn’t make anything.  Poor performance by the guy who is supposed to anchor the International squad.

Hoffman and Chappell virtually ran their opponents off the course.  They put up the day’s first point.  “Kevin and I were bitin at the bit,” Hoffman said.  “Sitting sucks.”  Hoffman and Chappell were on the sidelines Thursday, much to Charley’s displeasure.

D.J. pretty much carried the load down the stretch in this one.  Koepka hasn’t done much over the first two days.  Adam Scott has been a huge disappointment for the Internationals.

The U.S. team trailed early in a lot of the matches but finished strong on Friday.

“It was unbelievable,” said team captain Steve Stricker.  “Our guys stepped it up again.”