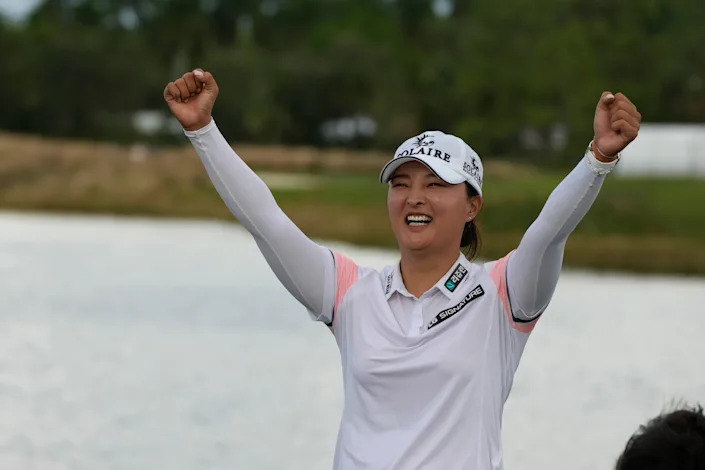 Jin Young Ko's 63 on Sunday at Tiburon was nothing short of sensational.

Jin Young Ko left little doubt on a sunny Sunday at Tiburon Golf Club that she is the Queen.

The world’s No. 2 buried just about everyone except for a game Nasa Hataoka but not even dueling 64s by Hataoka over the weekend could keep Ko from winning virtually everything with a sensational final found 63 and a 23-under total at the CME Group Tour Championship.

Ko started the day tied with three other players, including Hataoka but she buried half of them with six front nine birdies and a nifty 30 going out.  She was machine-like, hitting fairways and greens with surgical precision, putting on a ball-striking clinic.  She hit a mind-boggling 63-straight greens after a rough front nine on Thursday when her left wrist was beyond painful.  That left wrist kept her from practicing earlier in the week and she went out each round without hitting any full shots on the range — which made her performance even more incredible.

She kept Hataoka at bay the entire back nine and led by two going to the final hole.  Ko once again hit the fairway then made it the 63rd green.  Which ended Hataoka’s hopes for a Ko mistake.

That 63 was Ko’s career best round and it won her the $1.5 million first prize and the Race To The CME Globe.  She also beat out Nelly Korda for LPGA Tour Player Of The Year honors.  She’s the first South Korean player to win the POY twice.  It’s been a super season for Ko as this was her fifth win of the year and the 12th of her career.

Ko looked beyond calm all afternoon.

“I don’t have pressure on the course.  I just want to better play than the other players.  So, I did it, and, yeah,” said Ko, who had more wins (five) than rounds in the 70s (four) in her last nine events. “Also, I’m happy to make like my best career score today, 63 — 64 was my best score, record, but I crushed it and it’s so happy.”

Ko had only one bogey over her last 63 holes, making 24 birdies in that run.

With the season over, Ko’s ready to relax.

“I want to keep the golf clubs at a distance,” she said, “and not think about golf and get a good sleep.  Just want to put potato chips in my stomach and watch Netflix.”

Sounds like a good plan for someone who just banked $1.5 million.

Ko closed with an eight-under par 64 and won the Vare Trophy.  The Vare goes to the player with the lowest scoring average for the season — but there’s a catch.  A minimum of 70 rounds are required.  Jin Young Ko and Nelly Korda were 1-2 on the scoring average list but neither player met the 70-round minimum requirement for the trophy.  Lydia Ko did.

She finished with a 69.34 average for her 73 recorded rounds.

“It’s really special because obviously it sums up the whole season,” Ko said. “All the other things do, too, but at the end of the day golf is about how consistently well you can play and what kind of low score you can shoot. And the Vare Trophy obviously exemplifies that.”

Ko ended a 1,084-day winless drought in April by capturing the Lotte Championship.  Lydia also came out of the Olympics in Tokyo with the bronze medal.