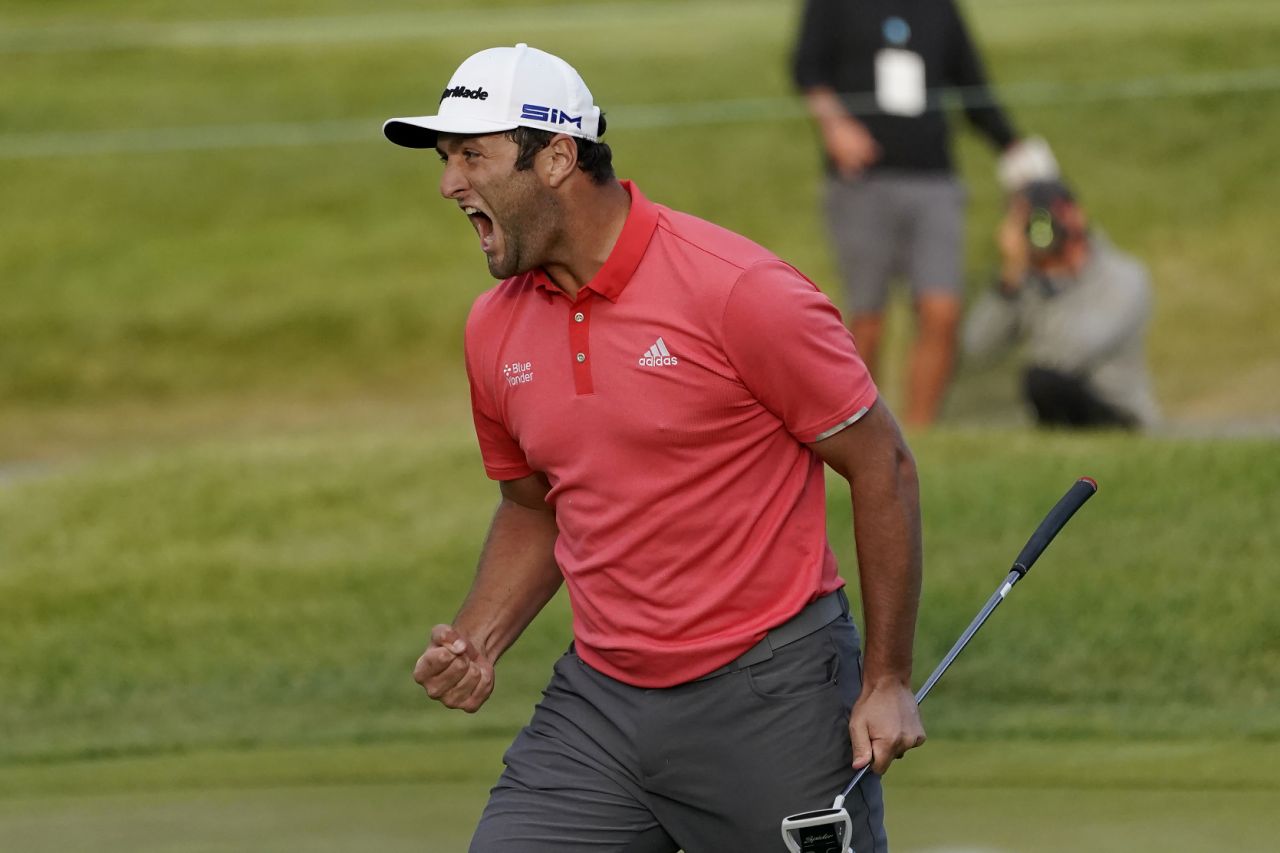 Jon Rahm lets out a roar after sinking a 66-footer for birdie in the playoff.

Jon Rahm’s Saturday brain-freeze at Olympia Fields turned into a Sunday afternoon stunner in a BMW playoff that matched the world’s top-two players in a head-to-head thriller.

The yawner that was last week’s Northern Trust became a distant memory with no less than five players coming down the stretch at Olympia Fields with a chance for victory.  By day’s end, it turned into a mano-a-mano with two of the world’s best.

It took an entire afternoon of birdies and bogeys to set the table for one incredible playoff hole.

World’s No. 1 Dustin Johnson entered the final round tied with Hideki Matsuyama at one-under par.  With birdies on three of his four opening holes, it looked like Johnson was on his way to a second straight playoff win after last week’s blowout in Boston.

But Jon Rahm had something else in mind.  After an incredible gaff in the third round when Rahm picked up his ball on the fifth green without marking it, Rahm was hopeful that he “wouldn’t lose by one shot.”

The talented world’s No. 2 got off to a steady, if not impressive start with a pair of birdies on the front nine that still left him two behind Johnson at the turn.  But it wasn’t only Johnson making noise over the final 18 holes.  Young Joaquin Niemann  had four front nine birdies that gave him a 31 at the turn and put him at three-under par.  He took the lead when D.J. bogeyed the 10th.

But is was Rahm who made the most noise coming home.  He picked up his fourth birdie on the back nine when he rolled one in from 30 feet at the par three 16th.  A par-par finish was good for the week’s low round, a six-under par 64.  Rahm posted four-under and waited to see what Johnson would do.

A bogey at the 14th took Niemann out of the hunt and Matsuyama, playing with Johnson, couldn’t find enough birdies over the final nine holes, leaving Johnson as the sole challenger to Rahm.

A birdie at the 15th moved D.J. to three-under.  He was stuck on three with with pars at 16 and 17.  Needing birdie at 18 to tie Rahm, Johnson’s drive found the right rough and from 180 yards out to a firm green, his chances for three didn’t look good at all.  While Rahm went to the range, Johnson’s approach went long, settling toward the back of the green, a distant 43 feet from the cup.  Johnson faced a twisting, double-breaker that looked like a long-shot at best.  Johnson had to play for a big left-to-right break.  He hit his spot perfectly and as the ball approached the hole, it veered to the middle of the hole and disappeared into the cup.

Back on the range, Rahm heard the roar from a small number of spectators around the 18th green and knew what happened.

“I reminded myself that anything’s possible,” Rahm said, accepting the bomb from Johnson and the invitation to a playoff.

As fate would have it, Rahm turned the tables on Johnson on the first trip down 18 in overtime.  Johnson got a huge break right off the bat when his drive was heading well right for the rough and trees.  It hit a tree and bounced back into the fairway while Rahm’s tee shot found the right rough.  Johnson hit his approach to 30 feet then watched as Rahm caught a flyer and his ball settled some 66 feet from the hole, long left.

Rahm, at best, had a difficult two-putt while Johnson’s putt gave him a reasonable run at birdie.  It was then that fate made up for Rahm’s mistake on Saturday that cost him a penalty shot.

Rahm started his putt at least 12 feet left and as it came off the top tier of the green, it began to track toward the hole, Rahm moved to his left, following the path of the ball and saw it go squarely into the cup, hitting the pin and dropping in.  Rahm let out a scream followed by a pair of fist pumps.  He then settled down and watched Johnson’s bid to extend the playoff stop just short.

“Never did I think I’d be making another 50-to-60 footer,” Rahm said afterward.  “With the weather and the way I was striping it, I knew I had a chance,” he said of his final round effort.  As for the winning putt — “I had to get it to a spot to the left and let it ride.  It looked really, really good.  I can hardly believe it.”  Rahm also believed that the penalty on Saturday actually helped him win.  “It kind of made me mad at myself, and I just went on with my focus after that and was able to play amazing golf and stayed aggressive,” Rahm said. “I can tell you that after that two-putt, making that six-footer for bogey, I was like, ‘OK, that’s it. No more playing around, let’s go.’ That’s kind of what mentally did it for me.”

The win was Rahm’s fifth Tour win and it moved him into the second slot at East Lake for the Tour Championship.  The top three at East Lake represent the top three players in the world rankings — Dustin Johnson starts at No. 1 with Rahm second and Justin Thomas third.