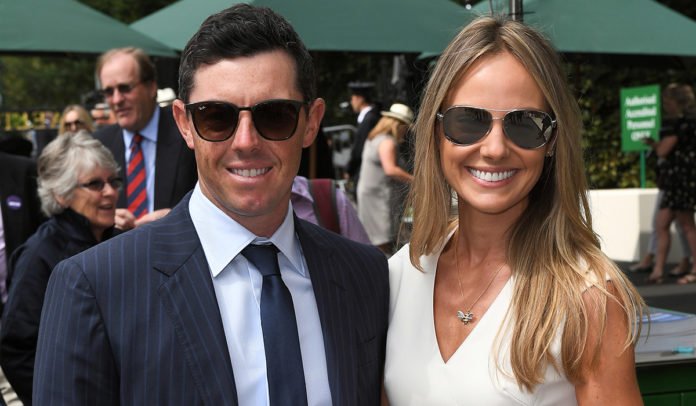 Rory McIlroy WILL be playing in the Tour Championship and his life has changed in a big way as he and wife Erica became parents this past Monday.

Rory and Erica welcomed baby daughter Poppy Kennedy McIlroy to their household.  She was born 12:15 p.m. on August 31 at the Jupiter Medical Center.

“She is the absolute love of our lives,” McIlroy said. “Mother and baby are doing great. Massive thank you to all the staff at Jupiter Medical Center and Dr. Sasha Melendy for their amazing care.”

Little Poppy’s arrival was timed perfectly.  It ends speculation that Rory, the defending FedEx Cup and Tour Championship winner last year, might have to withdraw from this week event that begins Friday.

Valderrama is a real-life, big-boy golf course in Spain and it flexed its muscles during the first round Thursday at the Andalucia Masters.

At the end of the day, only five players in the field managed to break par.  Firm greens, 10-15 mile-per-hour winds and the course’s famous ball-eating cork trees made for a tough day.

Spain’s Jorge Campillo had a chance for the solo lead but hit his second shot into the water at the famous par five 17th.  A bogey dropped him from three-under and he finished his day with a two-under par 69 that tied him with Connor Syme, John Catlin and Guido Migliozzi.  All four of those players went out in the morning wave.

Pep Angles, the hometown favorite, shot 70 and was the only other player under par.

Campillo, despite the bogey at 17, was happy with his work.   “I played very good on the front nine and the back nine I kept it steady there, which was very good,” said Campillo, who came into this event on the back of two top 10 finishes.  It’s just a shame about the bogey on the 17th, but overall it was a good round.”

Jon Rahm Gets An Early Look At Winged Foot:

Tiger Woods and Justin Thomas paid a visit to Winged Foot prior to the BMW Championship and on Tuesday of this week, Jon Rahm followed their lead and headed to Mamaroneck to get his first look at the U.S. Open venue.

Rahm put wife Kelly to work as his caddie and he got in 18 holes at Winged Foot.

“All I can say is it’s a heck of a golf course,” Rahm said Wednesday as he prepped for the Tour Championship at East Lake.  “It’s just a difficult course. It’s long. It’s narrow. It’s undulated. You just need to play really good golf.  If it gets firm like some of the USGA guys told me they want it to be, I don’t see how any of us shoot under par. Or if we shoot under par, it would be somebody winning by a lot,” Rahm predicted.

“Danny Noonan” Looking For A Loop At U.S. Open:

Gotta be Danny Noonan from the cult movie Caddyshack.

Noonan was played by actor Michael O’Keefe, who has parlayed that role into getting tee times at famous courses all over the world.

But now Danny Noonan (O’Keefe) wants to caddie for real in the upcoming U.S. Open at Winged Foot.

O’Keefe recalled the audition for Caddyshack:

“I lied that I could play golf. I had to learn quickly, and thanks to Tom Nieporte, the pro, and his son, Joe, and Tom’s assistant, Dave Schulz, I managed to cobble together a swing. The best I ever got was to about a 12 handicap. These days, when asked what my handicap is, I reply, “I was raised Catholic,” O’Keefe said recently.

As for O’Keefe’s caddying experience — he was a caddie at Winged Foot in 1971 and 1972 and grew up 15 minutes away, in the village of Larchmont on Long Island.

Said O’Keefe of this job-seeking for the U.S. Open:

“Now, almost a half-century later, I’m ready to take my caddying to the next level. I’m serving notice that I’m available for, interested in and worthy of carrying a bag for any professional (or amateur) in the field at this year’s U.S. Open.”

See you in the lumber yard.