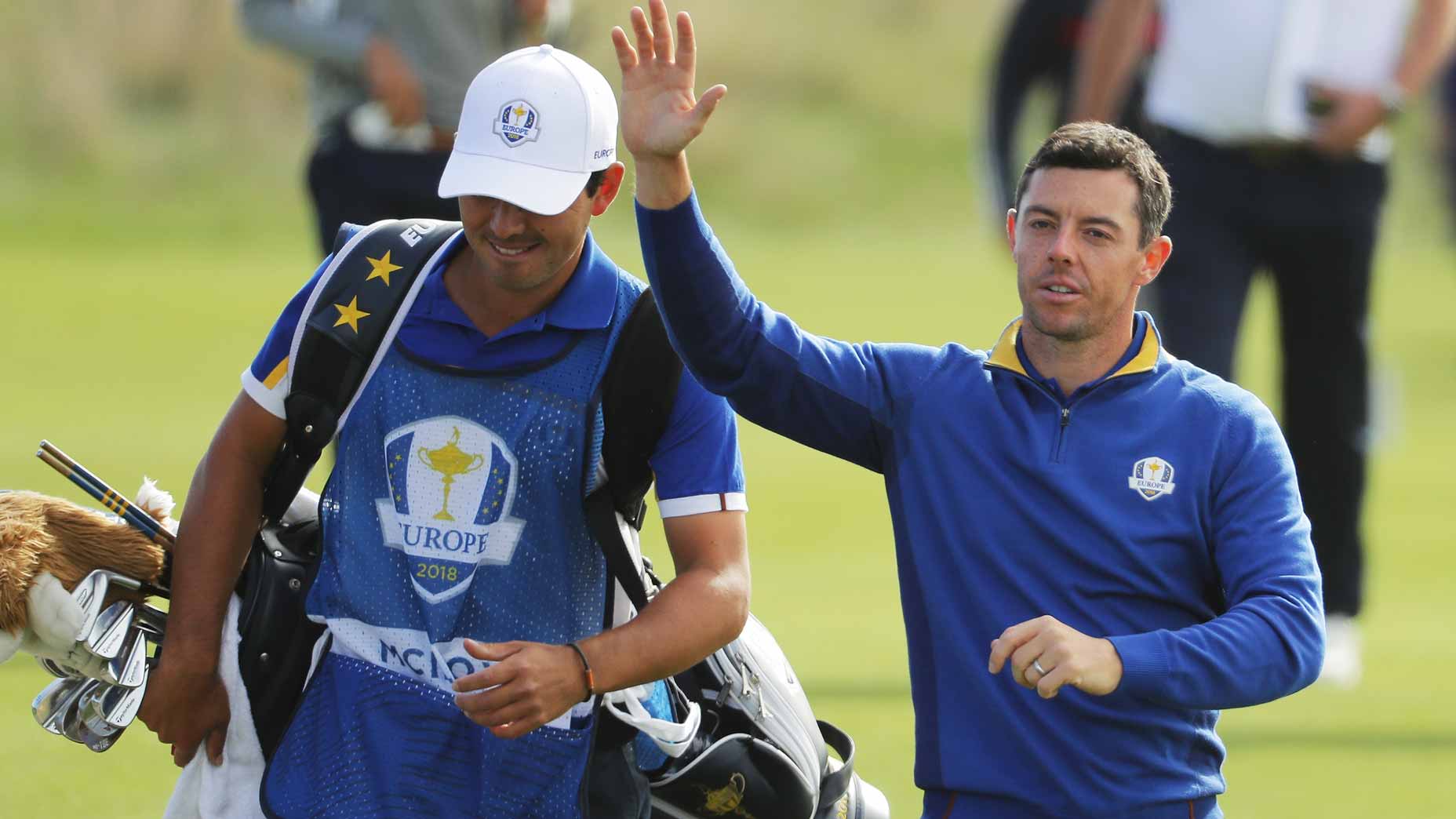 Rory McIlroy is a cornerstone of the European Ryder Cup team.

Rory McIlroy is one of the Bubble Boys in the FedEx Cup playoffs, dangling at No. 28 with only the top 30 heading to East Lake.  Still, McIlroy believes he’ll need to rest up for the upcoming Ryder Cup matches and will be skipping the European Tour’s flagship event.

The BMW Championship at Wentworth will be played September 9-12, a week after the Tour Championship.  Evidently Rory is anticipating he’ll make it to East Lake.

“It’s probably too much for me. I’ve played more than I probably should have and feel like it’s just sort of all caught up with me,” McIlroy said after he announced his withdrawal from the event.

McIlroy has had an up-and-down season, highlighted by his 19th PGA Tour title at the Wells Fargo Championship in May.

“I think having two weeks off after the Tour Championship is going to be nice,” he said this week a the BMW Championship, second event in the PGA Tour’s FedEx Cup playoffs.

“Like I sort of was planning to go over to Wentworth to play the BMW, but it’s just too much travel, and with what’s coming up with Ryder Cup – yeah, that’s a long week, no matter if you’re in Europe or the States, especially I haven’t missed a session yet.  So say I play five sessions again, yeah, it’s a really long week.  So the two weeks off after the Tour Championship are going to be well needed, and I’ll go in there nice and refreshed and ready to give it my all.”

McIlroy has played 19 times this year so far, with three appearances coming on the European Tour in Abu Dhabi, Ireland and Scotland.  Tyrrell Hatton will defend his title at Wentworth in September.

McIlroy fired an eight-under par 64 Thursday to share the first round lead at the BMW Championship at Caves Valley with world No. 1 Jon Rahm and Sam Burns.

James Morrison Sniffs 59, Ends Up With 60 at Omega European Masters:

The 59 watch was on Thursday at the Omega European Masters and it was England’s James Morrison trying to become the second man to shoot 59 in a European Tour event.

Morrison went out in the early morning wave at Crans-sur-Sierre Golf Club, going off the 10th tee.  He shot 31 at the turn thanks to an eagle, three birdies and a bogey.  He birdied the first, second and fifth holes, then birdied seven and eight.  He needed an eagle at the par five ninth for the magic number.  He was just short of the green in two and his pitch came up a couple of feet short.

“It’s a four round event, my 10-under isn’t going to win today, you’ll need to be minus 20 or more. You’ve just got to keep your foot down and keep going and use that as a gee-up.  I was in the first group out at 7.40 and the greens were just absolutely perfect this morning, with no wind,” Morrison said.  “You know you’ve got to take advantage, but doing it is another thing.  I holed a couple of good putts, chipped in at 11, and it just snowballed from there.  Bogeyed the 18th, my ninth, to be four-under par through nine, but it was just a good, solid start. Hit the right shots when I had to and made a few putts.”

Morrison had a nice bounce-back from his bogey at the 18th.  “It was funny, after I bogeyed the 18th I went to the first — which is probably the hardest hole on the course — and made birdie there.  My caddie said ‘Come on, I think we can shoot 59 here’. I had eight holes to go and you use that as more of a mental push to keep going forward, use it more of a mental tool.  I had a really good look on the last and thought ‘just try to make this’. The minute your focus goes like that, you chip it stiff, make birdie and shoot 10-under par.  I was trying to hole that shot on the last, but next time maybe.”

England’s Marcus Armitage and Frenchman Robin Sciot-Siegrist were three shots back with 63s.  England’s Andy Sullivan and South Africa’s Dean Burmester were in with 64s.