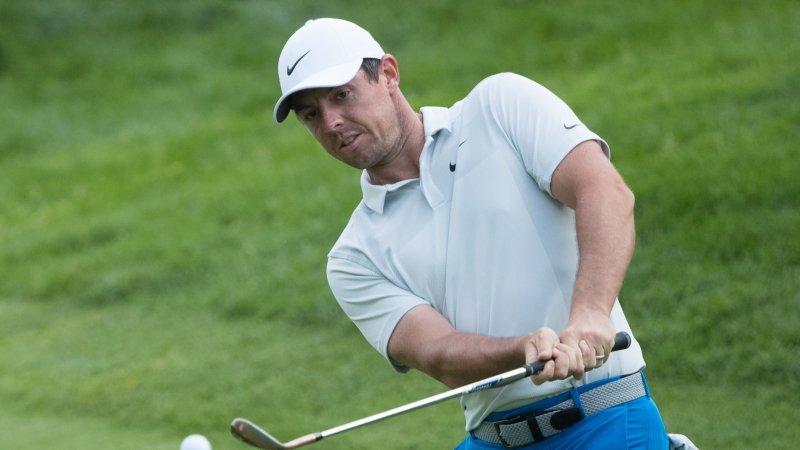 Posted By: Tom Edringtonon: May 02, 2019In: FeaturesNo Comments

The Show Pony showed up.

No one has had more success at beastly Quail Hollow over the years than Rory McIlroy.

He’s the only two-time winner of this event that now goes by the name Wells Fargo.

Rory delivered on Thursday, sorta like those stage coach drivers back in the wild west when Wells Fargo delivered those strong-boxes full of gold, silver and other assorted valuables.

Rory started slow, then suddenly came to life over his final nine holes and by late afternoon, hit the ground running with a nifty 66 that might have been and should have been a couple of shots lower.  Doesn’t matter, Charlotte has something to get excited about after last week’s snooze-fest in New Orleans.  There’s a buzz on the grounds at Quail Hollow, a course that has the ability to kick your butt if your game is off kilter.

McIlroy’s first nine was a total yawner.  He managed to hole a 20-footer for an early birdie at the second but gave it back with a wayward drive that found the water on the par five seventh.  Rory made bogey there and bogey on a par five is a mortal sin when you have McIlroy’s kind of firepower.

“I didn’t drive it very well,” McIlroy would later point out but you wouldn’t know it by the way he played the final nine holes.

At the 10th, he pitched his third to three feet and birdied that par five then stuck a sand wedge inside two feet from 119 out at the 11th.  Sure as heck looked like it would be three straight birdies after he made a nifty approach at the 12th from behind a tree in the rough that drew some roars when the balls stopped just four feet from the cup.  Rory then made his worst stroke of the day — totally missed the hole from that short range.

The pre-tournament favorite then drove it 329 into a greenside bunker at the short par four 14th and holed his fourth birdie — this one from just inside seven feet.  He got it to four-under at the par five 15th, two nice shots to the back fringe then two-putts from 60 feet.

The Green Mile proved no problem.  At the 16th he flew the bunkers on the right that require you to carry it 300 in the air.  “I have an advantage, I can fly the bunkers there,” Rory said.  “I had a little nine-iron in.  He got that one to nine feet, made a nice putt and just like that, he had the lead at five-under.

After a nice up-and-down at 17, he went thermo-nuclear with his tee shot at the 500-yard closing hole.  Try 366 yards.  “I had sand wedge in there,” Rory acknowledged, and that was from 134, mind you.  Everyone figured he make the nine-footer for 65 but he didn’t.  Should have.  Lady momentum was escorting him across the Green Mile.

“Just nice to see some good shots, make some good swings,” Rory said after signing his card.  “I felt I was sorta scrappy today.  I made the most of what I had.  I didn’t drive it well, the last three tee shots were a little better.”

He admitted the monster 366-yarder at 18 was his best driver swing of the day.  “May have to re-think what I hit off the tee there,” he said with a slight grin.

What held him in there was the facet of the game that often hurts him.  “I felt my short game was pretty good.  I hung in there.”

It’s how Show Ponies are supposed to perform.

Rory’s that long and when he’s on, well, just look at what he did over the final nine.

Scary part is that it could have been better.

He leads by one after day one although non-show-pony Joel Dahmen had the nerve to grab a share with Rory.

This oughta be interesting come Sunday.

Wells Fargo Round One Scoreboard: