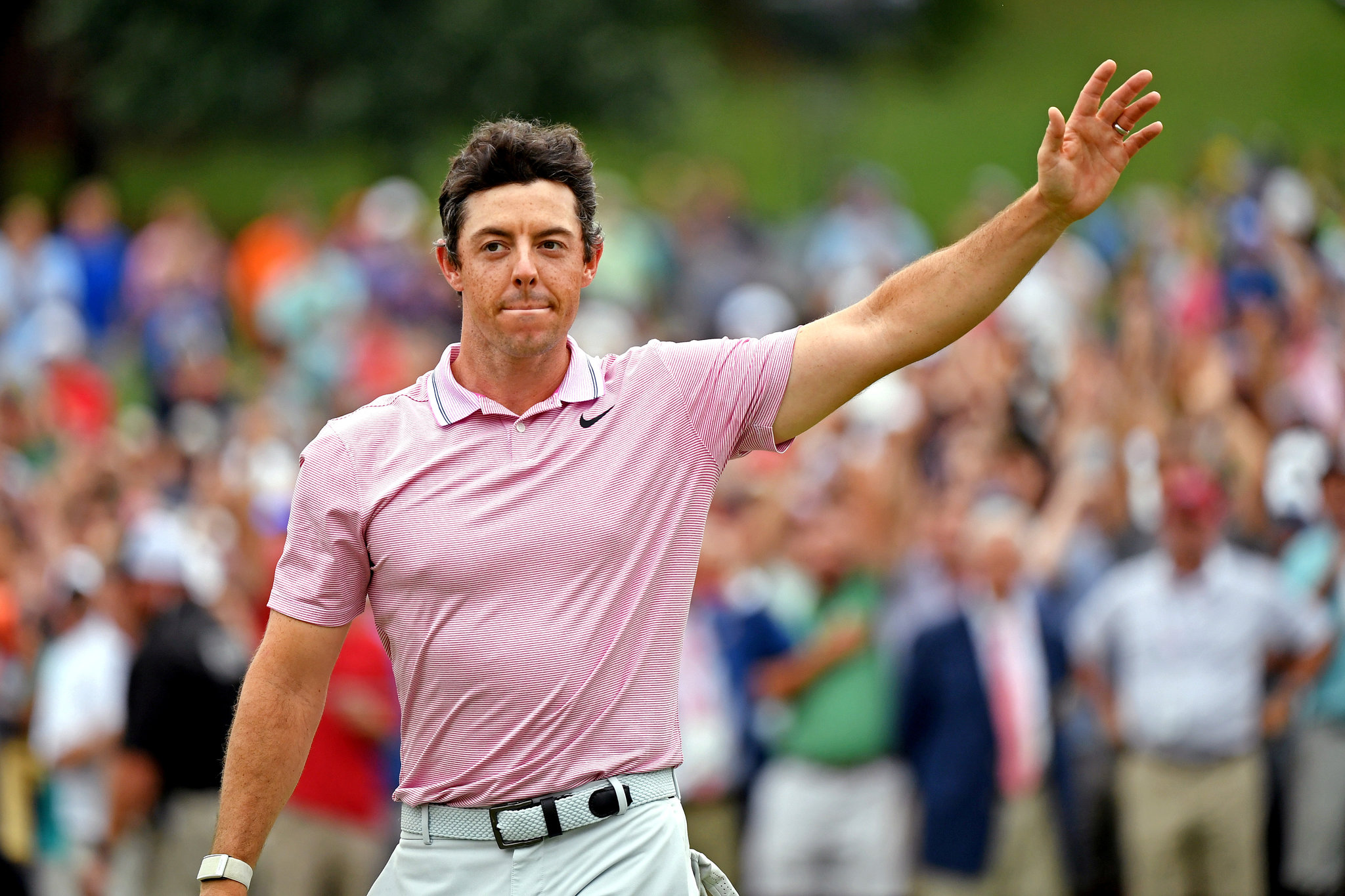 Rory McIlroy dismantled the back nine at Bay Hill en route to his opening 66.

It was a bit muggy in central Florida when Rory smacked his opening drive at 7:45 a.m.  Justin Rose was with him.  Francesco Molinari was supposed to be in the group but he withdrew at a late hour, replaced by Kyoung-Hoon Lee.  Lee was a little sore.  He and his wife were in a fender-bender Wednesday morning.  So much for the courtesy car.

Perhaps Rory was still a bit bleary eyed when his day started with a par at the 10th.  At the slight dogleg 11th, Rory pulled his approach shot from  181 into the drink on the left.  He managed to save bogey and he had to wait until the short gimme-birdie par five 16th to get back to level.  At 18 he stuck his approach to 10 feet, drained it and headed to the front nine, his stride with that characteristic Rory bounce.

As the temperature began it’s journey to 90 degrees, Rory’s game heated up with it.

At the first he planted a wedge from 130 within three feet to go two-under.  His two best shots of the round  would come at the par five fourth.  His 325-yard drive found the left fairway bunker.  With 259 in, he hit a gem of a three-iron to 24 feet.  He’d hole that eagle putt and at four-under,  he was  climbing the leaderboard.  Birdie at the 525-yard sixth, a cape hole around a huge  lake, was no problem. Five-under.  At the eighth, where a pond  guards the front of the green, he found himself just inside 14-feet and he slid that one in to get to six.  Par at the ninth and he signed for 66, took  the early lead then chatted up the Golf Channel folks.

Rory paid tribute to Arnie, after all, it is the AP Invitational and it took Rory a while to warm up to this one enough to put it on his schedule.

“I think how authentic he was,” McIlroy said of Palmer.  “If you wanted to emulate anyone from the last 100 years in golf — it would be Arnold.”

Arnie would like how Rory was the first big name to show no interest in the proposed Premier Golf League and Rory reiterated his stance on that again.  “I like to think I’m quite a loyal person.  The PGA Tour has given me a platform to show case my skills,” Rory restated.  “That and I didn’t like where the money was coming from.”  Word is the Saudis are funding the venture.

As Rory left after his day’s work, the winds were increasing and it sure looked like 66, six-under at Bay Hill, would stand as the day’s best effort.

The last time we saw or heard of Matt Every, he was shooting 85 last Friday at PGA National.  He went 19-over for 36-holes at the Honda and missed the cut by a whopping 16 shots.  He pretty much held form there, after all, he missed the cut in Phoenix,  tied for 32nd at Pebble then missed another cut at Riviera in the Genesis.

But there’s something about Bay Hill.  Every won here back-to-back in 2014 and 2015 to everyone’s amazement,  including Palmer.

Apparently Every awoke from his Honda coma.  With winds hitting 20 miles per hour, he went out and found three birdies over his first nine holes.  Every, like Rory, started off the 10th.

He picked up two-in-a-row and one and two, then got another at the fourth, where Rory made eagle.  He was tied with McIlroy at six-under.  He missed at six and seven, had good looks and hit putts that barely missed.  He made up for it at the eighth where he holed one from just inside 32-feet to get to seven-under.  A nice two-putt from nearly 57 feet at nine and Mr. Every was your inexplicable first round leader with 65 on an afternoon where most were struggling (see Phil Mickelson’s 77).

“I don’t know, I wish I knew,” Every said after surprising everyone, including himself.  “When I saw the wind, I was thinking I just don’t want to shoot myself out of the tournament,” Every added.

Crazy enough where world’s No. 309 put up one heck of a round and stole the first-day spotlight from the world’s No. 1.