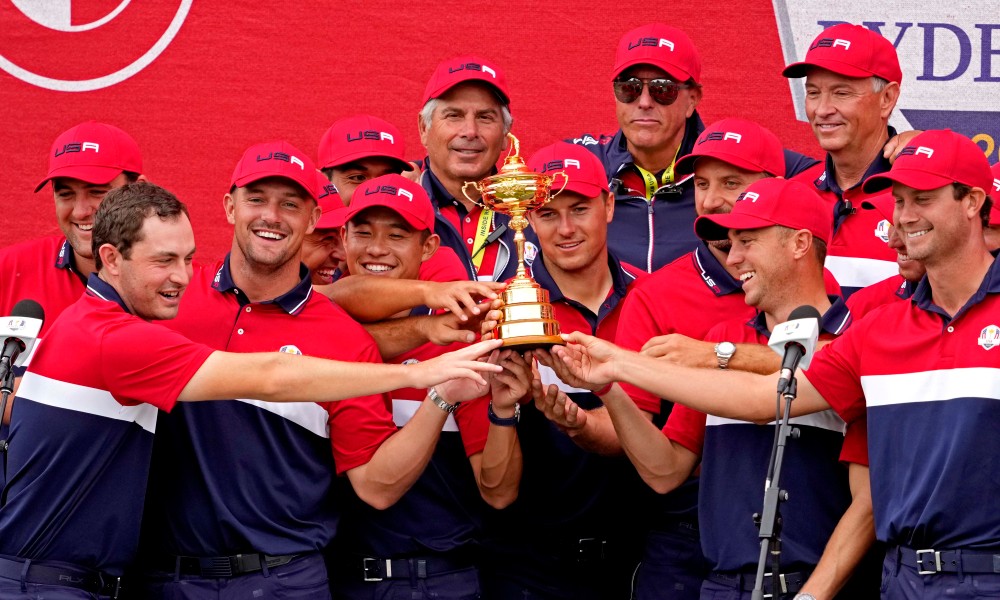 Team USA brought the cup back to America with a crushing 19-9 victory.

“Let the word go forth from this time and place, to friend and foe alike, that the torch has been passed to a new generation of Americans……”

The ghosts of the Old Guard of American Ryder Cup-losing teams have been banished and what transpired for three days in Wisconsin was the birth of a new generation of American golfers — young, fiery, talented and fearless.

After two days of total domination in foursomes and four-ball, the United States put the hammer down in the Sunday singles and came up with an historical 19-9 victory that left little doubt that the tide has turned for the United States in these biennial matches with Europe.

The final score was 19 points for the United States, 9 for Europe, the biggest blowout since 1967 and it was PGA Tour Player Of The Year Patrick Cantlay who best summed up what happened for three days at Whistling Straits:

“I woke up and told the guys I wanted 20 points.  This is the next era of Ryder Cup teams for the United States.”

This 2020 Ryder Cup that became the 2021 Ryder Cup will be remembered as the three days where a young team from the United States came of age.  It was Steve Stricker’s low-key, just-let-em-play and stay-out-of-their-way approach that unleased the full potential of a team that may have been the most talented ever put on grass by an American captain.  There were no big speeches, no motivational speakers, no, none of that.  This group didn’t need that.  What they needed and what they got was the quiet guy from Wisconsin who fashioned an amazing array of pairings that matched talent and personalities.

Steve Stricker wasn’t afraid to change things up after going 3-1 in that first morning session on Friday.  He sent out different pairings and got the same result — another 3-1 dominant performance in the afternoon four-ball matches.  It was USA 6, Europe 2 after Friday and that set the tone for the next two days at a difficult Whistling Straits course — a real big-boy layout if you will.

Saturday was more of the same — USA 3-1 in the morning and in the high, blustery winds of the afternoon, the U.S. came back for a 2-2 session, the only one that might have had Steve Stricker worried for about an hour.  By day’s end, it was 11-5 heading into the Sunday Singles where the U.S. had a massive advantage.

Things fell apart for Europe early and often on Sunday.  While Xander Schauffele struggled against Rory McIlroy in the first match out, Patrick Cantlay made it clear he was better than Shane Lowry.  In the third match it was first-timer Scottie Scheffler hitting Jon Rahm so hard that the world’s No. 1 found himself four down after the first four holes thanks to four straight birdies by Scheffler.  The entire European team saw that on the scoreboard and deep down inside, they were shaken to their core as their only powerful player the first two days was going down.  It marked the beginning of the end, the rout was on.  “I got off to a really nice start — I just kept the pressure on him (Rahm),” Scheffler said after his lopsided 4-and-3 win over the world’s No. 1.

Cantlay, Scheffler, Bryson DeChambeau, Dustin Johnson and Brooks Koepka made it five full points in the first seven matches and it was just a matter of seeing if the team could get to 20 the way Cantlay wanted them to.

There was no suspense, this one was over early.

Once the last match ended and the celebration began, Stricker had one-word for his feelings:  “Speechless!” he said.  Later, he found the words that perfectly summed up how and why his team accomplished what it did:

“These guys all came together two weeks ago.  They played great.  It’s a new era for USA — golf these guys came with passion, energy and a lot of game.”