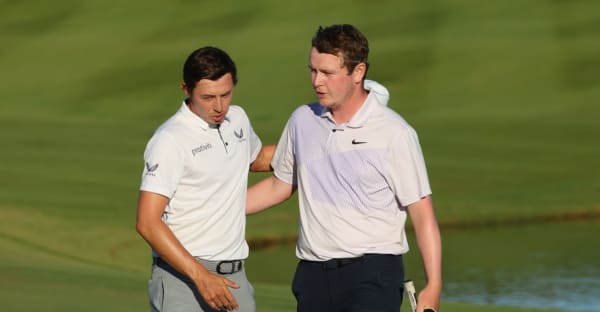 A birdie on the first playoff hole won the Italian Open for Rob MacIntyre.

When he was left off that last European Ryder Cup team, Scotland’s Robert MacIntyre knew he simply needed to play better.

He did something about it this past week at next year’s Ryder Cup venue when he outlasted U.S. Open champion Matthew Fitzpatrick and won the Italian Open on Sunday afternoon at the Marco Simone Golf Club outside Rome.

Bobby Mac put 10 birdies on his scorecard Sunday and posted a spectacular 64 and found himself tied with Fitzpatrick after 72 holes at 14-under par when Fitzpatrick signed for 67.

The two went back to the tee at the par five 18th, where there was thick rough on both sides of the fairway.  Fitzpatrick’s drive settled into the junk on the left while MacIntyre hit a perfect drive that dissected the fairway.  Fitzpatrick’s second found the deep stuff right of the green while MacIntyre cruised a fairway wood and left himself about 45 feet for eagle.

Fitzpatrick’s third found the fringe, 14 feet from the cup and after MacIntyre’s first putt settled within two-feet for birdie, Fitzpatrick missed his birdie attempt and a simple tap-in handed the 26-year-old Scot his second DP World Tour victory.

With Mac and Fitz going one-two, France’s Victor Perez, another prime candidate for the European squad next year, took solo third at 13-under.  Pre-tournament favorite Rory McIlroy, the world’s No. 2, looked road-weary over the weekend.  On Saturday, he missed five birdie putts inside seven feet and shot even-par 71 and it was pretty much the same on Sunday — not enough magic/energy in the tank for Rory.

As for the winner, MacIntyre hopes to re-write the story from the last time picks were made for the European team.  He was by-passed for the Whistling Straits competition even though he was around the top 60 in the world rankings and made the cut in all four majors and that included top 12 finishes at the Masters and Open Championship.

MacIntyre was thrilled with his victory and hopes to find himself back in Rome for the matches next year.  “It’s my main goal – it’s my only goal for the next year.  At the start of the week I didn’t think this week was going to be the one – the style of golf course, the way it was playing.  But we worked on a few things on Tuesday and Wednesday and I felt so in control of my golf ball this week – my wedges, my long irons and even that hybrid that came into the bag last week.

“This means everything. I was down and out about two or three months ago,” MacIntyre explained. “I didn’t know what I was doing, didn’t know where to go.  But we spoke to the right people, started working with Simon Shanks and I’ve hit two of the perfect golf shots into the last there. There’s so much hard work gone into this.”

Truth of the matter is that MacIntyre needed the victory.  He’d fallen to 110th in the world rankings and the victory will give him a big jump there. He was also a lowly 73rd in the Race To Dubai points standings and the win jumped him all the way up to 15th.

One important observer on hand to see the Scot’s win was Luke Donald, the European captain for next year.  Donald played and made the cut eventually finishing tied for 34th at one-under.

No doubt MacIntyre got a handshake from the captain and and a little “keep up the good work” encouragement.