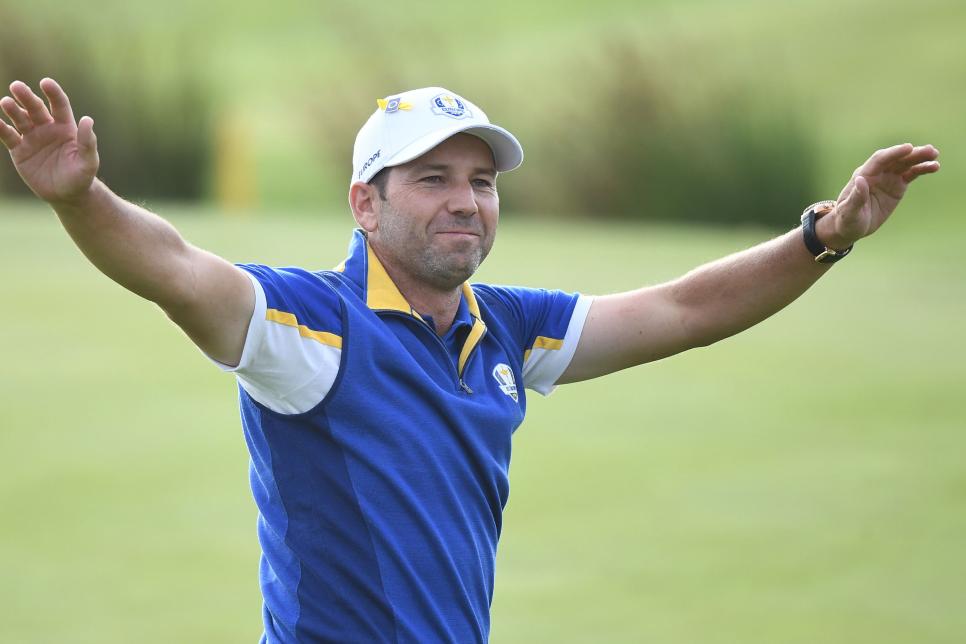 The last time we saw Sergio Garcia at a DP World Tour event, he withdrew without giving a reason from the BMW Championship at Wentworth.

The second round of the event was canceled due to the death of Queen Elizabeth II.  Instead of showing up for the second round on Saturday, Garcia was seen on the sidelines of a University of Texas home football game in Austin.

Garcia was fined for the no-reason WD and now it’s looking like he’s going to forfeit his DP World Tour membership.

Garcia played just three European events this season — the Dubai Desert Classic, the BMW International and the BMW PGA, from which he withdrew after the first round.

The minimum to maintain membership is four events, including three Rolex Series events, along with a tournament in his home country, which Garcia has not played.  Losing his membership would render Garcia ineligible for next year’s Ryder Cup matches in Italy.

Garcia has 14 career wins on the DP World Tour and holds a lifetime membership and he can continue to play DP World Tour events.  But with the caveat that he would not earn points toward qualifying for the European Ryder Cup team.

It was also a given that Garcia would one day captain a European Ryder Cup team but with his LIV participation, that’s out the window.  Henrik Stenson was ousted from his Ryder Cup captaincy earlier this year and replaced by Luke Donald after Stenson signed with the LIV series.

Last week Min Woo Lee chased Jon Rham for four days at the Open de Espana before Rahm pulled away from him and the rest of the challengers over the final nine holes.

Thursday Lee kept up his good play with a five-under par 66 at Valderrama, host of this week’s Andalucia Masters.

Lee had an eagle and five birdies on his car but a pair of bogeys prevented him from taking the solo lead.  Lee shared the top spot with Soren Kjeldsen, Pep Angles, Jazz Janewattananond and David Horsey.

Defending champion Matt Fitzpatrick got off to a less-than-stellar start and finished the first round with a three-over par 74.  His younger brother Alex, cut him by four shots with a one-under par 70.

Steve Stricker’s been on a roll on the Champions Tour and he had some fun this week watching his youngest daughter Izzi, win a state title.

Izzi, a junior at Waunakee High School near Madison, made carded four straight birdies on her way to to winning the Wisconsin Interscholastic Athletic Association Division 1 girls’ golf championship.

“I really didn’t know what to expect coming in,” Izzi said after signing for a two-under par 70.  “I didn’t know it was going to rain so that was a battle. But I knew I had to shoot under par. I knew that’s what was going to do it. So I just kept my head down and tried to make as many birdies as I could. I had 68 in mind, which it didn’t need to be. I don’t like playing for a number, though. I just know if I give it my best, it’ll be good enough.”

Her father won a state title in 1984, is now the first father to have a daughter win the state championship as well.

“We’re so proud of her and amazed how she set her sights on playing well for this state tournament and she did,” Steve said. “She sometimes gets left out because she’s still going to school but we try to support her as much as we can. She has a ton of talent and is getting better all the time. Izzi is on a great path!”