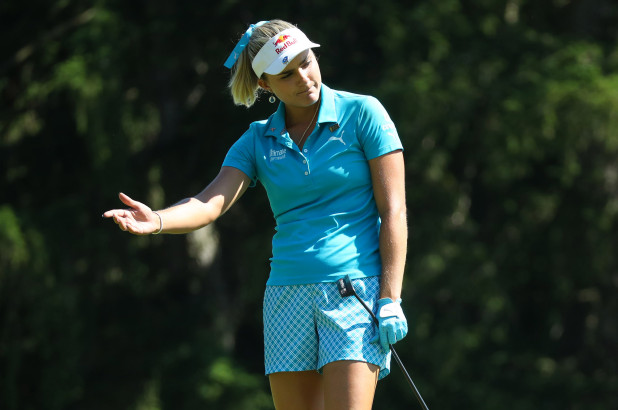 Lexi Thompson, who won at Indy two years ago, is in danger of missing the cut.

Posted By: Tom Edringtonon: September 27, 2019In: In Other News...No Comments

Back to business on the LPGA tour.

One would think that’s the case, except some Americans didn’t get the memo.

The tournament with the world’s longest name got up and running,  we’ll just call it the Indy Tech Championship,  and naturally there’s a South Korean at the top of the first round leaderboard.

Mi Jung Hur (she goes by M.J.) dazzled the field with a nine-under par 63 Thursday at the Brickyard Crossing and that was good for a two shot lead heading into today’s second round.

Bronte Law, one of the Sunday heroes for the European Solheim Cup team last week,  was one of three players two back of Hur.

The Americans?  Well, Marina Alex, who was seven feet away from a U.S. win, got over her missed putt.  She was low American at 66 along with Amy Olson.

Lexi Thompson, who failed to win a match at the Solheim Cup, continued her poor play and shot a four-over par 76.  That tied her for 120th and she’s in danger of missing the 36-hole cut.  Same story for Morgan Pressel (76), who may have seen her last Solheim appearance.  Trash-talking Danielle Kang back up her Solheim flop with 74 on Thursday.

Defending champion and world’s No. 2, Sung Hyun Park, opened with a two-under par round of 70.